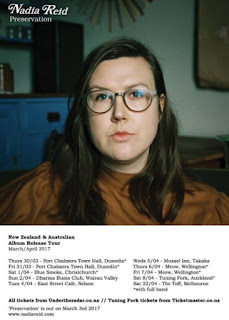 The second of two sold out shows in Reid's home town (don't get me started on how Dunedin's city boundary is insanely large, swallowing up towns like Port C and Mosgiel).

Wooden halls are notoriously difficult acoustically, especially with a full band,  but the sound was pretty good. There were moments in almost every song where it was clear Reid - her talent - has this trajectory that few artists have.

One thing I noticed live that I hadn't noticed after hours listening to both her albums at home: every second song seems feature lyrics about direction, in particular forward movement. Overall, her lyrical palette is restrained, which is probably a good thing. And most lyricists have tics that become apparent after two-dozen or so songs. Will be interesting to see how, and where, her lyrics evolve in the future.

I won't go over the comparisons that I've seen in other places, but seeing her leading the rockier numbers I was put in mind of Niko Case when she fronts for the New Pornographers. Which is most certainly a good thing.

My favourite song at the moment is 'Richard', which has a very Kurt Vile groove, but there was something about Reid's voice that reminded me of something older. Last night I thought it might be Shawn Colvin's 'Sonny Came Home'. Listening to that song now, I'm not sure if that's the one.

Just a phenomenal talent and a bloody good night.

I find listening to a Leonard novel a useful reminder about the power of dialogue and the cancer that is disconnected exposition.

This one had some links to my work in progress (an ex-nun who kinda fell for St Francis of Asissi), but everything is connected, somehow. See Fortnight #4’s discussion of first draft solipsism.


The Man Who Could Fly: St Joseph of Copertino and the Mystery of Levitation by Michael Grosso (non-fiction)

This book is clearly connected, no neurotism required. And it only came out last year, so after I did my initial deep dive of research. But I can't imagine what writing my book would be like without reading this one.

That’s not to say it’s a good book. It’s really not. It’s often turgid, disjointed and uses logic selectively. And it took an age (2 months) to get through, despite being massively het up about the subject matter.

But it did give me something to argue against. And that, my friends, is a precious gift.

I was looking for a catalogue of common types of dreams (falling dreams, flying dreams, teeth falling out dreams) but this turned out to be a tool for those hoping to divine meaning from their dreams, as if they were tea leaves.

Halo. To see someone wearing a halo in your dreams indicates sad news; if you were wearing the halo, it predicts travel; if you dreamed of taking off a halo you can expect some kind of improvement in business or financial matters.

…as dreams allow one to go safely and quietly insane for a time each day, it is not, as heretofore believed, the sleep that is necessary for our well-being, but the dreams.

So, I loved Wolf in White Van, and I loved the first half of Universal Harvester. I mean, that title seems at once the most bad-ass Sabbath-era metal album title (Darnielle has also written a 33 1/3 book on Sabbath’s Master of Reality) and totally prosaic and farmy (the book is set in rural Iowa).

I normally listen to audiobooks on 1.25x or 1.5x, but early on in Universal Harvester I wanted to savour the experience. At a little over six hours normal speed, I felt the book (read by the author) was slipping away too fast.

The way horror (think: horror movies) and grief (think: lost parents) intersect, it’s really powerful. The novel has this genre-fied hot rod engine that is ready to take the reader anywhere, but then Darnielle chooses to keep it idling. Actually, he parks the hot rod out back and completely forgets about it for a while, and then, on the last page, when we’re all a bit tired and strung out and only a handful of us have any hope left, he runs to the hot rod, jumps in and goes for a very brief blat. But by then, it’s too little too late for most of us. 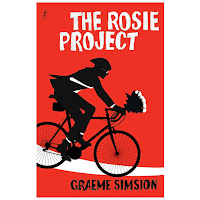 I wanted something light and commercial and I got it here.

I’m totally not comfortable with the way this and many entertainments before it derive so much of the content from the comedy of the main character’s non-standard brain wiring (Don Tillman is somewhere on the ASD spectrum, but so are we all). At times it felt cheap, easy and/or untrue. Whenever Don’s wiring or the demands of the chick-lit genre come into conflict, the genre wins.

But still, I listened. Still, I lapped it up. Says something about my brain’s wiring I guess. Though I’m going to try hard to resist any urges to add any Helen Fielding to my Audible wishlist.


In My Father’s Den by Maurice Gee (novel, NZ, audiobook)

This was like the anti-Universal Harvester. I started listening to this novel on a day I worked from home (lawns to mow, washing to hang out, meals to cook) at 1.25x, but after a couple minutes felt comfortable cranking up to 1.5x. After an hour of biological time, I pumped it up to 1.75x and managed to finish the entire book in a day.

It’s been a number of years since I read Plumb, but I only read Rachel Barrowman’s biography of Gee last year. In My Father’s Den was like a mash-up of both of these (the autobiographical stuff about Henderson/Wellsford, the contrasting religiousness of Paul Prior’s parents) extruded through a classic crime novel (seventeen year old girl found dead in the scrub, half-scalped). But rather than conform to the crime genre, we get the story in a very NZ literary novel way: nothing procedural or quote-unquote pacy about this. The solution to the mystery is stumbled upon, rather quickly in the scheme of things, and resolved predictably enough (the climax does feature a tomahawk). While it might fail as a piece of genre fiction, it success as literature thanks in part to the momentum it borrows from genre. It doesn’t, unlike Darnielle’s book, park the crime story behind the shed and forget about it. It’s there, always, but Gee is able to buy enough time to give us the narrator’s entire life story, which, cunningly, allows the murderer’s motive to be neatly foregrounded without rousing the reader’s suspicion.

Another genre piece, this time from the master of the spy novel. I found this the hardest to manage as an audiobook. The genre demands the accumulation of significant detail, frequent reversals and assumed personas, and I found it hard to keep it all straight in my head. It wasn’t that it was all moving too fast for me (I found some parts went on too long), but that I couldn’t flip back a chapter or two to check things, such is the inexorable progress of an audiobook when you’re cycling, or hanging out the washing, or doing the groceries.