Life the damper: Fortnight 22 of the Burns

In addition to all the November reading and watching I discussed yesterday, I should also say I've been working through Werner Herzog's filmmaking masterclass on, uh, Masterclass.


I actually did the Aaron Sorkin scriptwriting masterclass at the start of the year (it costs money but it's for my novel so: tax deductible) and it helped me get inside the mind of a scriptwriter and to think about structure for film and TV in deeper and more nuanced ways (not saying it's totally deep and nuanced, just that my starting point was pretty superficial).

But my novel is more about filmmaking rather than scriptwriting. I didn't really know that in January but I do now.

Because I did the Sorkin course, Masterclass spams me with other courses I should take. I took notice when they said there'd be a Martin Scorsese one in early 2018. And if I paid the cost of that course now, I could have access to ALL masterclasses for 12 months.

(This sounds like a paid advertorial at the start of a podcast, but I promise it isn't.)

So I started watching Herzog's videos and he got his hooks into me. I've watched Fitzcarraldo (didn't like it) and Grizzly Man (meh), but that's probably it. I did listen to a DIrector's Guild of America podcast where Kevin Smith interviewed Herzog after the premier of Fire and Blood. Herzog says some of the same things in his Masterclass as he does in that podcast, but it's much easier to focus on Herzog's message when it isn't accompanied by Kevin Smith's post-ironic wonder at the fact Herzog reads books or goes through the films budget with the accountant every night during the shoot.

Herzog is better without that. As a character study of him alone, the masterclass is worth the time.

I was stalling, but here are the numbers from last fortnight:

The non-fiction was prep for two talks I gave and an email interview with a website in the US ahead of THE MANNEQUIN MAKERS release there on 12 Dec.

But yeah, a crappy fortnight in terms of productivity and quadruply so when you think I really wanted to leave Dunedin with a first draft of my novel complete but I could only muster 1,150 words on the beast in 14 days.

The last time I worked on the novel was 22 November.

Well, I was in Wellington for five days (school visits for my daughter, catching up with friends and Ministry colleagues).

And we stayed in this cool old place right by the beach at Island Bay and the weather was great and, and, and... I'm not really complaining. 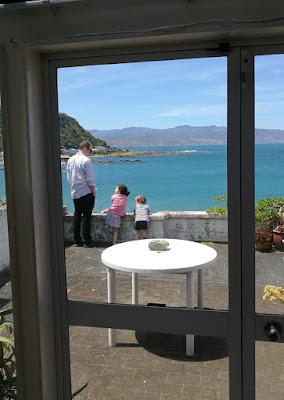 And when I got back from Wellington.I prepared for and gave two talks, and took part in a daylong workshop.

My first speaking engagement was at the Southern Cities Creative Hui on 30 November. I spent the whole day there, because the lineup of speakers was pretty darn impressive, with Kiwis like Hera Lindsay Bird, Shayne Carter and Victor Rodger, and visitors from Italy, Papua New Guinea and Australia.

My keynote was on digital and analogue perspectives on storytelling, keying in on what a novelist (me) thinks when playing a narrative-driven game mode of a basketball simulation (NBA 2K18's My Career mode).

At afternoon tea I bonded with Shayne Carter over our shared love of the NBA. I had a slide of my created player in a Sacramento Kings jersey, and he told me how much he loved the Kings when they had Demarcus Cousins and Isaiah Thomas, and I was like, Bro!

I'd previously confessed to him that I'd used a computer programme to mash his lyrics from Straitjacket Fits days with a bunch of other Dunedin Sound bands to make "poetry" and he'd seemed genuinely interested instead of horrified or, worse, bored.

So I'm left with one question: did I just make friends with a rock star?

Did I mention that his memoir will be amazing if the snippet he read is anything to go by? I think I did on Twitter, at least.

The next day of the Hui was a collaborative futures workshop in the basement of the Athenaeum (an old library on the Octagon).

I took part because I'm kind of in love with this city and even though I'm moving back to Wellington (*sad trombone*), I wanted to be part of brainstorming ways to take the UNESCO City of Literature thing further and connect Dunedin more widely with other UNESCO creative cities.

(Did I mention that, as a Burns Fellow, I'm now eligible to go on City of Literature residencies, even if I stop living in Dunedin? It's like an open relationship without the bit where one or more people get their hearts broken.)

I had to head up the hill during the lunch break to talk to the Otago Association of Teachers of English.

Their Big Day Out for Professional Development had two keynote speakers to break up their workshops. In the morning they heard from someone from the Dunedin Study (so, you know, evidence based and world renowned) and in the afternoon they heard from me.


I had an hour to fill, and did so by talking about to join two bad ideas to make a novel (stepping through the genesis of both THE MANNEQUIN MAKERS and my location scout novel-in-progress), read from the novel-in-progress (the chapter 'Pietrarubbia'), talked about my experiments with artificial intelligence and read one of the Dunedin poems (see above), and also covered video games (see above), before ending with my reckons on teaching English in 2018 and beyond.

It was a bit weird talking about St Joseph of Copertino and questions of faith in a high school chapel, and the mic crapped out after about 15 minutes with a lot of time and a large space to fill, but all in all I had fun and some of the teachers (the younger ones) commented that they got something out of it.

After that rush of public appearances, my dance card is pretty clear.

I've got to judge the Robbie Burns poetry comp and attend the ceremony on 25 Jan, and that's all I can think of.

But don't think I'll suddenly get back on top of the novel and knock out a couple 20K fortnights.

There's this thing called Christmas (we'll be spending it in Chch).

And the move back to Wellington (the packing, the logistics, the drive up with a few stops along the way).

And I've agreed to review four books in the next two months.

And my son is sick again and my wife has run out of sick leave (her contract is up just before Xmas).

And there's already a photo of me up on the second floor of the Uni library, as if I've already left, or died, or both. 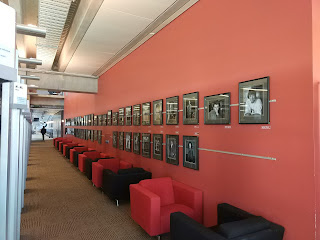 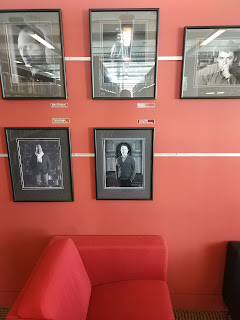 May my tombstone read: He set terrific goals.
at 11:37 AM