These are the top ten books I read in 2012 (regardless of when they were published).

What I said about it in August: "It's a great book...  [but] all of the narrative juice is used up before the novel actually closes (about 90% of the way through to be vaguely specific). But I was transported, tempted and entertained. Definitely one of the best books I've consumed this year."

Turns out, time conceals all flaws when it comes to this novel. Certainly the most memorable novel I consumed this year. As always, Numbers 1 through 3 could come in any order depending on my mood.

What I said about it in October: "Yeah, this was a good book... The audiobook took a bit of getting used to as the narrator didn't go for much in the way of differentiating characters' voices in dialogue (and decided part way through to make Mary Hearn sound more Irish)...

"But there are advantages of receiving a text like THotKG aurally. Carey's Ned Kelly writes in a comma-less tidal wave, and with the audiobook you have no choice but to keep up with him. Carey's way of breaking up the narrative by describing the various packages that Kelly's account comes in (the conceit is that this true history is archived somewhere in Melbourne) is pretty canny. In fact, the whole thing is canny."

I never blogged about my own thoughts on this collection, but here's what I said in a Dom Post column from September: "These days, most historical fiction being published in this country features a woman in a flowing dress on the cover, but Patchett's short stories mine a different vein. There are shipwrecks, marathon swimmers and battles between sealers and religious nuts. Costume dress is kept to a minimum.

"The present and the past are allowed to inhabit the same frame, whether it's the ghost of Maud Pember Reeves pestering a council clerk or a musket-wielding time-traveller appearing on the side of State Highway 1. Our past has never felt so exciting or accessible."

And 1: Here's my interview with Lawrence from June.

What I said about it in June: "I found myself popping my iPod on while doing the dishes or watering the garden, not just during my workday commute, which is always a good sign for my level of engagement with a book.

"For the first time in a while, the American Contemporary Social Realist Novel felt like a genre, and I don’t mean that disparagingly: it felt snug and comforting. Here was the entire spectrum of middle class white college kids in the early eighties (so not much of a spectrum, really) talking about Victorian novelists and literary theory and religion (at other times, the narrator quotes long passages from books on these topics)."

What I said about it in May: "My current audiobook is Ann Patchett’s State of Wonder, read by Hope Davis. Sadly, Ms Davis struggles with the Australian accent and the first third of the novel features two Australian characters. This small quibble aside, I’m enjoying the book..."

I didn't blog about this novel once I'd finished it, but it was one of the more memorable novels I read this year. Strong plot, clean, unobtrusive writing, with something unnerving running just below the surface.

#6 - Straight through from London: The Antipodes and Bounty Islands, New Zealand - Rowley Taylor

Two years running my #6 spot has been taken by a non-fiction book that I came across while researching THE NOVEL (aka The Mannequin Makers). Taylor's book contains a great mix of general history, stunning colour photos and detailed appendices for those with a special interest in these islands. In particular, his log of every visit by vessels of the NZ Steamer Service was super helpful.

I promised a couple of times this year to write about Cochrane's latest collection (and James Brown's, which I brought and read at the same time). But I got busy finishing my novel and, truthfully, I didn't respond to The Bengal Engine's Mango Afterglow as strongly as I had the last few of Cochrane's collections. Several tropes felt recycled. Basho, Li Po and Tu Fu were back. The worksheets were now "Pinksheets" and we got eight of them.

So much of the power of 2010's The Worm in the Tequila derived from the wry twinning of poet's recent diagnosis with diabetes and his alcoholism. He'd also moved from Berhampore to Miramar. For a poet of footpaths and footnotes, this is like a whole new canvas - but it is unfair to expect your favourite poet to get a new disease or colonise a new patch of town with each new collection.

Returning to The Bengal Engine a few months later -- and returning again after that and to Cochrane's other collections (Hypnic Jerks was on particularly high rotation for some reason) -- I got over my initial ambivalence and could see these poems for what they were: photographs from a poet who chooses sound over sight, punctuation over pixels.

The oldest entry on this years list by a wide margin, here's what I had to say about it in October:  "I felt conditioned to enjoy Far From the Madding Crowd [because I'd recently read The Marriage Plot]. And I did like it.

"I like the way it starts with a very static description of 'Farmer Oak'. I like the way he's had his shot at Bathsheba Everdene early on and the scene where young George drives his sheep off the cliff, reducing him to a shepherd once more.

This book features 22 short stories, a number of which appeared in Shepard’s first collection, Batting Against Castro. I really enjoyed Love and Hydrogen, but I’m just gonna come right out and say it: the book is too long...

"The book is lousy with superlative, or near-superlative, stories. And for that reason, I can overlook the overstuffing, the lack of whole-ness, and proclaim it an awesome book."

The number ten spot this year was tightly contested with a number of novels (Arthur and George, The Keep, The Human Factor, The Art of Fielding and The Forrests) and non-fiction books (The Tipping Point, The Botany of Desire, A Place of My Own, Keith Richards' Life) that were good but not great reads.

So my number ten spot goes to Moran's blend of autobiography and modern manifesto.

Here's what I said about it in November: "I placed a reserve on this book months ago at the library and then when it was finally my time, I was reading it with the eyes of a father-to-be... [What I didn't say: we found out after I'd placed the reserve that we were going to have a girl, so the book took on greater importance].

"Caitlin Moran LIKES TO SHOUT IN CAPS. A LOT. But it works for her. When she wants to, she can turn a great, surprising phrase. Por ejemplo: "I feel embarrassed that she is now having to deal with our secret blackness. This is private. The admin of my soul."

Target Practice
In my 2011 end of year reading summary, I noted the following goals for my reading in 2012:
2012 was the first year I've ever consumed more audiobooks than physical books (29/26). I blogged about this a couple of times (early starts/tired eyes; most of my reading time being on the way to and from work). I think my Top 10 list this year is a bit middle brow, which is partly due to the fact only so many books I want to read are available as audiobooks. I'm gearing up to listen to Roberto Bolano's 2666 next year, but at 39 hours and 15 minutes, it's kinda daunting.

What sort of books did I read? Here's a helpful camembert: 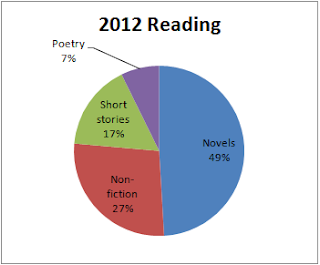 My response: More poetry needed. Novels can go down a bit, surely.

New or old-timey? Here's how the age of these books breaks down: 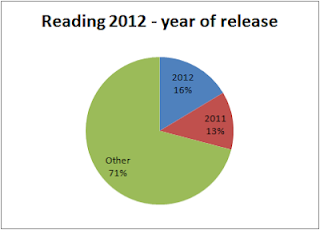 My response: More poetry needed. Novels can go down a bit, surely.

Where did they all come from? Here's how my year looked, based on the country of origin of the authors: 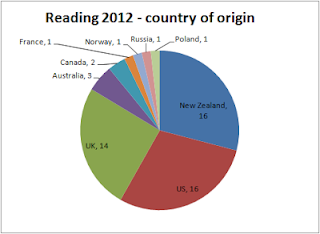 My response: A bit vanilla. Again, audiobook availability may have something to do with this. Next year, I'll try and read books from at least 12 different countries, including 3 countries I've not read anything from before.

Japan! haha. great post, very interesting to compare your list to mine. sort of inspiring too! must read more poetry and non-fiction. new goal :)

Thanks Toni and Cathy for your suggestions.

Cathy, I'm jealous of the number of Aussie's you knocked off in 2012. Something to aim for this year!