(NB: this is for the fortnight ending 18 June, so I'm a week behind)

What follows is, on one level, meaningless. It doesn't matter how many words I write, or how quickly. All that matters is what ends up getting published.

But, as I've said before, quantity is a precursor of quality. And things like wordcounts help to keep me motivated, allow me to reflect on my practice and, hopefully, DO BETTER WRITING.

This'll probably be too small to be meaningful (even if you click on it), so let me gloss it. It's colour-coded for the type of writing (novel, short stories, blog, poetry, essays, other) - more on the split between forms later. But it shows that I focussed on short stories in February to blow out the cobwebs, before sliding into the novel in month two.

There's a lot of non-writing days. Like every Saturday (except one) and Sunday (except two), and periods where I had people staying in Dunedin or was exploring (Catlins, Fiordland, Italy - that big blank patch on the right). More on which days of the week have been more productive shortly. 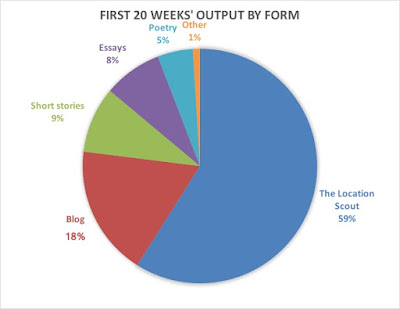 So, interestingly, non-fiction (blog + essays + other) is a pretty big slice of the pie. If you remove the Chris Cornell thing and the Recurrent Neural Network Poetry thing, the distribution would look more like what I'd have expected at the beginning of the year. I've gone and committed myself for at least one more decent piece of non-fiction (more on that in another post), but this exercise has convinced me I should probably start saying 'no' to things.

At the moment, I'm resisting a strong urge to go back to short stories. But I would like to find a way to carve out time later in the year -- like after I finish the 1st draft of the novel and before I start second draft, but that relies on me getting to the end of the first draft this side of Christmas... 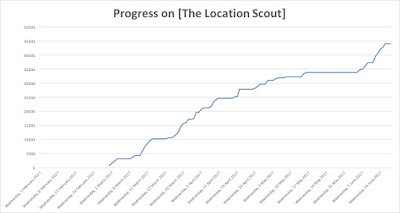 This is a little misleading.

When I open my working draft of the novel later today, it won't be 44,000 words, more like 36,000. These stats represent the cumulative total of my daily wordcounts on the novel, rather than the actual wordcount of the novel-in-progress.

So I've lost about 8,000 words already. This tends to happen when I'm starting a new section and I do it in a fresh word document, work on that for three or four days, then cut and paste the cream into the novel's main document.

Some examples for future reference that won't mean anything now: the Motta quotes between the first and second section (only about 2/3 made it in; these may be further slimmed down as time goes by); the Curio Bay insert.

To get to 36K after four months is okay, I guess.

I probably should have done a post at the start of the year about my expectations... If I did, I might have said 10K per month (only takes around 500 words every week day) as the minimum, but this wouldn't have factored in two weeks in Italy (and the prep for such a trip). Which would put me right around my floor.

So a little disappointing, especially as I feel the manuscript is getting a little flabby at the moment and I need to go back over the last 30 or so pages and trim, trim, trim. (But the other fifty pages have had that treatment already and feel tighter. So my first draft isn't rip, shit and bust. When I get to the end, it's probably my draft 1.5.)

Looking ahead, I should be about to meet and exceed 10K a month until I finish the 1st draft. At the moment I'm less certain about the total length of the novel than I was when I started. I'd have said 70-80K in February. Now, It feels 110-120K (about the length of THE MANNEQUIN MAKERS). But that's for the first draft - I may get savage in editing and create something sleek. May.

Doing the maths on this minimum scenario: if I need to produce another 80K words, that'll take 8 months but I only have 7 before the end of the residency. And what about Christmas and all the logistics of moving back to Wellington (probably have to go back a little early so my daughter's settled before starting school at the end of January)?

And I can kiss goodbye to my dream of a fortnight to work on short stories while I let the completed first draft breathe.

If I want a finished first draft by the end of November, I'll need to 16K a month. That seems doable. The last two weeks I've been able to produce around 1,000 words a day, so 10K a fortnight.

Doable, but not yet bankable.

What do the numbers say?


Which day of the week is my most productive? Part 1 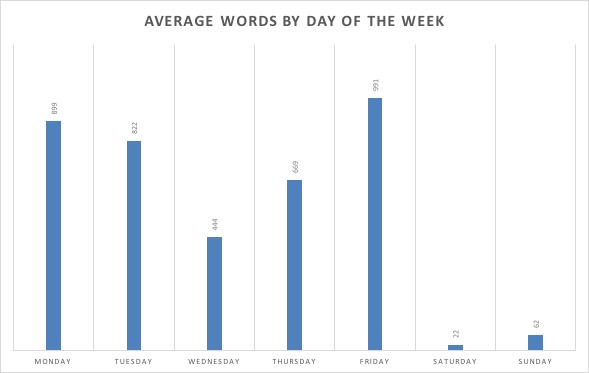 NB: this is wordcount across all forms, not just on the novel.

This result really surprised me. In an earlier fortnight summary I said Tuesdays were my most productive days, which made sense as I take the weekends off, Monday involves a bit of working myself back into the flow, and Tuesday is where I still have the energy and enthusiasm and direction.

And what's up with Wednesday being so paltry. Do I run out of energy after only two days of writing? Or is it that I only have two days of clarity about what I'm writing before having to scratch around on Wednesdays to be able to be more productive the rest of the week?

Then I considered how these numbers were calculated. It's the average of all wordcounts from the given day of the week, divided by the number of those days thus far (19 for Monday and Tuesday, 20 for the others).

But what about all the zero days? Surely they weren't distributed evenly.

And they weren't. Of the 19 Mondays, I had 7 goose-eggs. Wednesdays had 8 non-writing days out of 20. But Friday only had 4. This seems to be a quirk of when I've been travelling or had people come to visit from up North.

This is what it looks like if you take all the non-writing days out of the equation...

Which day of the week is my most productive? Part 2 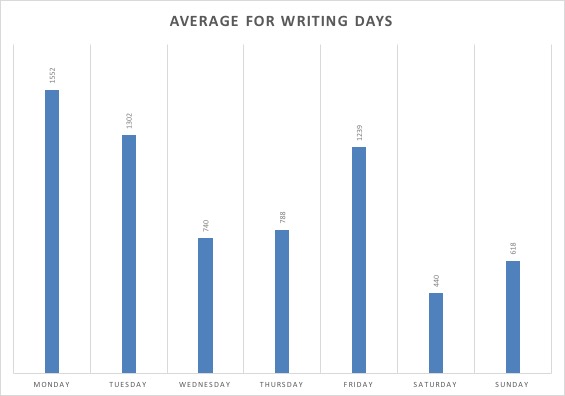 I'm still surprised Monday beats Tuesday. This may be due to some of the blogging that happens on Monday.

And the dip on Wednesdays and Thursdays? That's something to reflect on. It'd be great to pull those days up to 1,000 words per day, though that might be quite hard given I'm already 20 weeks in.

And how many words is a graph worth?

For me: nothing. For you: incalculable.