This ends the New Zealand portion of our programme

I'm off to the States tomorrow. WLG - AKL - LAX. We're having a 2-night layover in Los Angeles (wise, methinks, given the 7.5 month-old in our party) before getting to Iowa City (via Dallas and Cedar Rapids).

The travel trauma should rule a nice thick line under the first few weeks of The Mannequin Makers' life in the big bad world. I'm looking forward to fully immersing myself in the International Writing Program at the University of Iowa and writing some butt-kicking stories.

But for now it's probably worthwhile just noting down how The Mannequin Makers has fared thus far.

Well, it was #4 on the bestseller list in its first week. Okay, so the New Zealand Fiction list is quite a specific category, but A Man Melting never made it to the top 10... The Mannequin Makers also made #5 on the list of all books sold at independent books stores in New Zealand for the week.

The eagle-eyed among you may have noticed how a certain book is #1 and #2 of both lists (paperback and hardback). Feel free to bump me up a spot if you think that's cheating (I don't - in the great wash-up it's pretty cool to be fighting for airtime with a favourite for the Booker Prize).

One last musing on sales... It'll be interesting to see how things go in the coming weeks. Whitcoulls is selling The Mannequin Makers for $30, $8 off the R.R.P. They'd even moved it up from the "What's New" table near the back of the Lambton Quay store to the "What's Hot" table near the entrance. Which is all good (especially since Whitcoulls never bothered to stock my last book except for in airports), but Whitcoulls is no longer signed up to Nielsen Bookscan, which is used to compile the bestseller lists.

I'm just gonna forget about all that sales stuff until my next royalties statement comes through in March-ish next year.

I've seen seven reviews so far, and apparently there's one in the new North & South which came out today, but they didn't have it at Countdown yet.

(All I know is what RHNZ tweeted: 'In THE MANNEQUIN MAKERS, @Craig_Cliff “has crafted a brilliantly structured and evocative story.”' Sounds promising, but you can never trust those publishing types and their money quotes.)

The other reviews have been:

Highly unfavourable. Money quote is an indignant text from my father-in-law in Christchurch: "Who the hell is Phillip Matthews?"

Radio New Zealand (Nine to Noon), 7 August 2013
Mostly favourable (didn't like the fourth part as much as the others). Money quote: [the bit where she gives away why the Carpenter is mute, and about six other meaty plot points].

The Hoopla, 9 August 2013
Highly favourable. My first Australian review (for any book), that I'm aware of. Money quote: "This is a superb novel of parental obsession, the lure of the unattainable and the tragedy inherent within human nature." ALso, the bit where she compares TMM to Peter Carey's Oscar and Lucinda and Tim Winton's Cloud Street. Nice company, I reckon.


SwampThing, 9 August 2013
Highly favourable. Money quote: "Much like his craftsmen, Kemp and the Carpenter, Cliff has crafted a lovely bit o' story – well built and polished."

The Australian, 10 August 2013
Highly mixed (if that's a thing). Money quote: This twitter exchange, where bookseller Martin Shaw managed to draw both the reviewer and me into a conversation about the review... Ha!

Also of note: the fact I was compared to Peter Carey again (though this time it was meant to be disparaging). If that's the mud people wanna sling, I've no fear sticking my head above the parapet!

Aside: until this week, I'd only been compared to Peter Carey once before. It was in Sydney and I blogged about it:


When I said it was an honour to meet him [Tom Keneally], he said, “I am reminded of another young short story writer who approached me with reverence many years ago... who turned out to be Peter Carey. If I can offer one piece of advice: One booker is an honour; two is just an indulgence.”

Otago Daily Times, 10 August 2013
Mostly favourable (found Part Three a bit long: "just another shipwreck story", but liked the other parts). Money quote: "With The Mannequin Makers [readers are] being treated to a tale that has characters and a plotline even Dickens would have been proud of."

If you've seen any other reviews, lemme know and I'll hunt them down (though that might be hard in the States).

I wrote about my uneasy relationship with historical fiction for the New Zealand Book Council.

I did this interview with Lynn Freeman, which ran on the Arts on Sunday (4 August) on Radio National.

I did an event at the Palmerston North City Library (a place that used to be a department store, and I've previously described as my spiritual home as a writer) on Sunday 11 August.

There's an interview with Joan Fleming/The Lumiere Reader that should be online in the next day or so.

There'll also be a write-up about me in the Herald on Saturday 24 August (I think). And something in APN's regional newspapers one day soon (if I haven't already missed it).

To read through the 30 or so stories for the BNZ Literary Awards (Novice Category) that have made my longlist. There were 607 entries in total, and I'm hoping to trim down to 12 or 15 that I'll take with me to the states and mull over for a few days before I make my final decision.

Night at the Department Store: the launch of The Mannequin Makers

Wednesday night I launched The Mannequin Makers at Kirkcaldie and Stains, a Wellington department store/institution that is celebrating its 150th year.

Here's an excerpt from my speech: 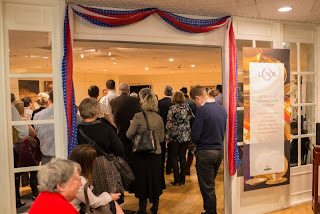 Some people have asked, “Why Kirks?” Beyond the fact I thought they might let me borrow a few mannequins, I’ve always been drawn to department stores. Maybe it was the fact my nana worked as a curtain maker at a department store in Palmerston North. Maybe it was the way Ian Athfeild transformed the town’s old DIC store into the new public library, where I did a lot of my growing up, or at least my growing into books. Maybe I watched the movie Mannequin at too impressionable an age. Maybe it’s that anachronistic vibe proper department stores have.  I’m sure the stock has changed a lot in the last 150 years, but there’s something pleasingly still and unhurried about walking around a place like Kirkcaldie and Stains.

So here we all are, in this mini-time warp, to listen to me babble on about a novel — how very Twentieth Century! 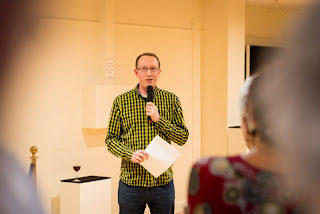 But we mustn’t despair. It has been an exciting week for New Zealand books and writers, after all.

The first: "Literature is not baby food, it doesn't have to appeal to everyone."

While I agree with the sentiment — and hold in my hands a book, if you’ll allow me to skite, with a profound capacity to disappoint — I question the analogy as someone who spends a lot of time covered in baby food. Anyone who scans the baby food isle at the supermarket these days will be met with flavours such as “Moroccan Lamb and cous cous” “Minted peas and polenta” “Cauliflower, Broccoli and Cheddar” — the last of these I can say without doubt is not to everyone’s taste, at least not a certain seven-and-a-half-month-old’s. 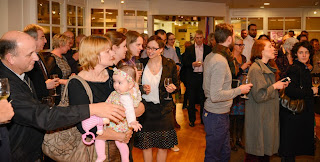 But I can unreservedly agree with something else John Campbell said. That it is, “a tremendously exciting time for New Zealand literature.” I say that as a reader, first and foremost.

Last time I did this, on the first of July 2010, I’d just gotten engaged. Now I stand before you married with a kid, a mortgage and a cholesterol problem... This book really took its toll on me. When I finished I was 10 kgs overweight, I needed glasses, and though I’m not quite sure how, I’m blaming all my recent dental bills on this book as well. But I got through, and it’s time to thank the people who helped get me here…

I wasn't quite sure how the space would work out. We were upstairs in the exhibition space (also known as the Christmas Sales space), though the drinks table was set up outside among the furniture. The fancy crockery that had been on display was pushed to the sides of the exhibition space and just invited to be knocked over or nicked... in all Kirks were very trusting and accommodating. And two mannequins were set up in the space, which was cool.

But the x-factor came from the eeriness of being in a department store long after closing. It was a bit Night at the Museum, or, dare I say it, that montage scene in Mannequin. 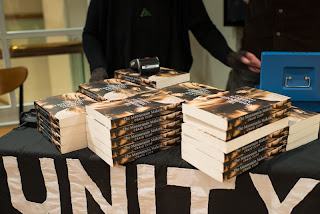 At the end of the night we filed out through the vacant store, echoing the scene in The Mannequin Makers when Avis is stolen from the window... But I've said too much already!

Tilly and Matt from Unity Books did a roaring trade on the night, even selling out of the copies of my first book that they brought along (mostly to colleagues who started working with me since my last launch and never got around to buying A Man Melting).

And to top things off, the first review is in and it's rather nice. 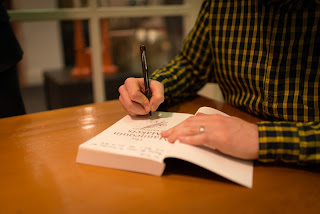 "This is an engaging and deadly smart novel... The Mannequin Makers lives up to its cover blurb billing Cliff as a talent to watch – it’s tremendous, darkly entertaining and original from start to finish."— Sam Finnemore, The Listener

The whole review is currently behind the Listener's paywall, but will be on newstands next week.

Let's keep this ball rolling, eh? Only 11 days till I leave the country (and you can publish all the lousy reviews you want!).
at 8:30 PM No comments: