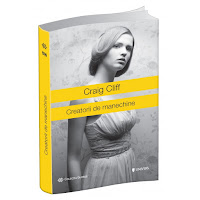 Since I last updated my personal website (craigcliff.com) in May 2013, not a lot has changed in terms of my writing career. No new books have been published (funny that, since I've completed none in that time). Only two short stories have been published, and two translations (a Spanish version of 'Copies' and a Romanian version of my novel) which, in truth, represents not effort on my part (at least not in the last three years). I went to Iowa for a writer's residency and didn't write enough. I quit writing my Dom Post column and wrote an essay about how blah I felt about four years of output. I read a lot about watching video games and wrote an essay about it.

(I think. I haven't been a fastidious blogger over this period either, so my records are sketchy.)

But my online bio and bonus blather is more out of date than all that. I got promoted twice at work (and turned down a third promotion). I co-created another human being. That first human being that was but a pooping, suckling lump in May 2013 is now a singing, twirling Frozen reenactment. I sold a house and bought a new one. I am so fucking middle class it hurts.

Like I did last time, I'm posting the old version of the Q&A section here (well, after the jump) because I am bad at filing things / have trouble knowing what to be embarrassed about / get public and private mixed up.

You can read the new version (small tweaks for now; some bigger changes will appear if I can think of bigger questions) on my website.