Nth Degree: Fortnight #6 of the Burns

I was going to do some graphs and trends-after-12-weeks stuff this time around, but I've got a bunch of other things to cover and post. So I'll leave the maths for another fortnight when I find myself less interesting.

As for fortnight #6, here it is, by the numbers:


Going to Fiordland for Easter took a chunk of time of out the end of week 1 and the start of week 2.

The plateau that I mentioned last fortnight persisted longer than I'd hoped (not so much in terms of total words, but how far into the story I managed to proceed). I resorted to alternative means of generating content (see cut-up chapter below), and managed to get something or somewhere.

With recent opportunities (see below), I'm still trying to figure out how much I try and get my location scout moving through time, or if I need to pull back and get things planned out better...

So I’m still using the dinky little Arcoroc cup I found in the dinky little kitchenette and having to make too many trips to make tea during my day and maybe I will end up ordering something in another moment of weakness.

And so it came to pass. 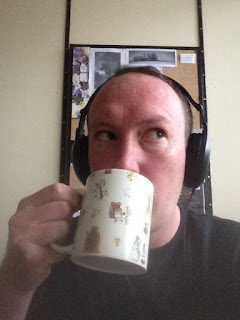 It depicts scenes from Monty Python's Holy Grail in a Saturday morning cartoon mode, which is kinda sorta exactly what my novel will turn out like if I'm not careful. 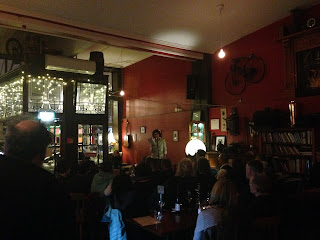 Last week I went to a reading at Dog With Two Tails. The feature poets were Sue Wootton (above) and Victor Billot. There was also an open mic for the collective members - it was an incredibly well oiled machine, each poet getting briskly to the mic, reading a single poem (some with patter, some without, but never more than necessary) and blending back into the crowd.

After an intermission, the chair came to me and lightly twisted my arm, so I read a poem ('Transition', with a rambling preamble that did not do justice to the preceding efficiency). While I've published quite a few poems, sporadically, I think the last time I read one of my poems in public was in 2006 at the Museum of City and Sea in Wellington.

It was a fun night and Sue and Victor were great too.

After going 11 years between public poetry readings, the next gap was five days. And instead of reading one poem, I had two and a half hours to fill!

The event was the annual Town Belt Traverse, organised by the Dunedin Amenities Society. As the Burns Fellow, I was positioned at the 5th and final station in Prospect Park and asked to "recite some verse" (people who talk about reciting and/or verse tend to think of poetry as they might dinosaurs or unicycling).

These first arrivals were the hardout walkers who hadn't really mucked around at any of the other stops and weren't going to lower their heartrate for a spot of poetry. Fair enough.

After about half an hour the stream of people became a bit more steady and in less of a rush, and I found my groove. People we much more comfortable stopping to listen if I was already reading, so it helped to have some longer pieces. (I learnt quickly that starting a poem as someone past made them feel as if they'd triggered a security light). In addition to about 20 poems of my own, I read some others' (Emma Neale, Geoff COchrane, Alice Oswald), and two short stories that are bitsy and poetic ('30 Ways of Looking at Marumaru South' and 'Parents in Decline').

I was joined in the middle span by one of the PhD candidates from the English Department who read Owen Marshall's 'The Divided World' (great choice) and two of my own poems (a weird experience). Thanks Damien!

Despite some awkward moments, I really enjoyed it at times, and had some good chats with people in between pieces.

The long and blinding road

TBH there are times when working on a story or a novel when it can get scary.

Scary because suddenly what you are working on becomes clear and there’s a bigger meaning to it, or a bigger question underlying the work, that you didn't quite know was there when you started and are confronted with the task of being the one to see this through.

Am I really fit to be asking this question?

Can I really write a novel that dramatizes this particularly big thing that I didn’t know I was even grappling with until ninety seconds ago?

In time the feeling fades. You mock yourself for your self-importance. That's the only way you can proceed, or at least that I can.

One does not sit down each day and produce work of genius. One might come upon it, in the course of one's work, and if one is careful not to look directly into its eyes, might encircle it, once, twice, thrice, each revolution claiming a little more of its power for your own...

Or not. Probably not.

I mentioned last fortnight that I was spending a lot of time looking at places in Italy on Google Street View. At the risk of turning this place into selfie-central, I bought this t-shirt to embrace the desk-bound nature of my research/creativity. 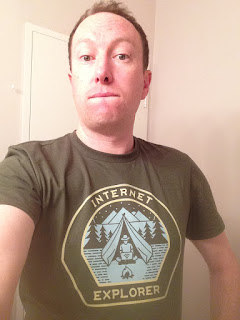 Next month, I'm off to Italy and, after fulfilling some non-novelistic duties, I'll have the chance to 'scout' locations in person.

This is good news. Great news, even. Except, it does mean a lot of this next month is gonna be spent playing my own travel agent, trying to squeeze as much into my time on the ground, and preparing for the primary reason for my visit (education business).

A welcome spanner in the works.

Perhaps I need a new t-shirt?