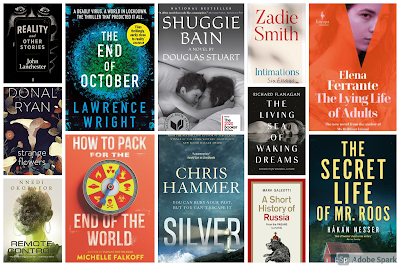 The End of October by Lawrence Wright (novel, audiobook)

Foresaw an influence pandemic and the disintegration of life as it was known in the US. Unfortunately, assumed this would play out the same way everywhere and the US would save the day. A good piece of speculation - and kind of absorbing - but on reflection: not a very good novel (later characters in particular are 2-dimensional).

The Lying Life of Adults by Elena Ferrante (novel, audiobook)

Ferrante through and through. Very good. How does it compare to the Neapolitan Quartet? Similar pretence of extreme self-divulgence from first person narrator. Same world. Less expansive, obviously (hard to compare a standalone novel to a quadrilogy).

I'm beginning to think I'm just not on the Richard Flanagan wavelength.

A classic case of stories being fine in isolation, but when piled on top of each other in a collection the strengths get drowned out by the weaknesses. Like Black Mirror without the edge. Like Steven Millhauser without the imagination. A very normcore kind of twist-in-the-tale short story, rinsed and repeated.

Not gonna lie, this felt long. Starting when Shuggie is on his own as a teen and then flashing back to when he's an infant and then staying in this flashback for 95% of the book is probably one factor. By then last 20% I was invested, and I think overall it's a good book. An instant classic, though? I'm not sure it brings anything new to the table, besides its fully realised characters.

There's an event near the midpoint of this thriller, the sequel to Scrublands, that ratchets up the death toll. It felt exhilarating at the time. "Oho, the stakes are through the roof!" But each aspect of this event are unpicked relatively quickly and simply so that the narrative can return to the much less interesting, but precipitating death that occurred in its first pages. So: structural issues, but not definitely not "red stickered". Two books in and you can count me as a Hammer fan.

Fabular in mode, mildly futuristic in setting. Suffers from the classic fable flaws of a lack of depth and the clash of science/tech and magic.

How to Pack for the End of the World by Michelle Falkoff (novel, audiobook)

Good YA. Love the title. Enjoyed the book. But the title could lead you to expect some bad shit to go down on a global scale. Not here. Bad stuff = worrying about all the ways apocalypse might happen and standard high school hijinks.

A Short History of Russia by Mark Galeotti (non-fiction, audiobook)

Weird. Structure again. This is the 3rd inspector Barbarotti novel, but the inspector doesn't show up until halfway through the novel, when he's introduced to the case we've spent 200 pages with from the two suspects' perspective. Hard to establish or maintain much tension like that. But interesting to see someone try!

I really liked Smith's essay collection, Feel Free, but this one felt rattled off, responding directly to events in the first half of 2020. I'm interested in the tension between the ever-moving news cycle and how a book (with all the inertia the publishing industry applies) can interact with this. Six Intimations felt stuck in the middle. Too late to be contemporaneous, too insubstantial to be enlightening.

A mixed bag. Promising premise: a couple's daughter goes missing for five years and then returns. Ryan steers head-on into Irish racism but gets the speed wobbles. Failure of nerve, imagination or research? Dunno.

Made You Look: A True Story about Fake Art

Moxie - impossible to not compare unfavourably with Book Smart... one of it's flaws is the way it uses 1990s Riot Grrl / zine culture as the inspiration for a 2020s teen's feminist awakening, rather than something organic from contemporary culture (the seams really start to show when the film tries to be meaningfully intersectional inside of a bloated-feeling but still inadequate 1:50 runtime)... BUT it does mean - in isolation - it has a killer soundtrack. TopLady isnt on Spotify (so not on one of the playlists here) but check out Green Light Red Light from 2015 on Bandcamp!