The absolute highlight of the month was seeing Protomartyr at Valhalla.

Like many bands I fall in love with, Protomartyr make good music for solitude, headphones and repeated (if slightly distracted) listening. And like many of these artists, who I like and then eventually get to see live (semi-recent examples being Parquet Courts and Courtney Barnett) there's a period of readjustment at the gig, with the music going from intimate to intimidatingly loud. And, I mean, of course Protomartyr thrash it live. That makes total sense.

But hearing them go hard showed me new sides to the songs (even if the lyrics were harder to parse) and I listened to their last three albums just as much the week after the concert as in the weeks leading up to it - a sure sign of an awesome live show.

A few days later I was talking about Protomartyr to someone who'd never heard them and I described them as a combination of young Nick Cave doing Joy Division covers backed by The Stooges. I'm not sure how I would have put it before seeing them live, but it wouldn't have been that.

Anyway, here's a playlist of my Feb faves, with more than a little of my favourite Detroit post-punks... 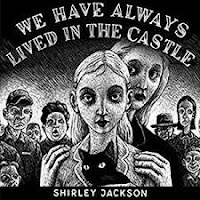 We have always lived in the Castle by Shirley Jackson (novel, audiobook)

This was fine. My negative reactions were me projecting the current failures of my own incomplete novel onto this one. I think.

I read this because Tregillis was coming to Writers and Readers Week (which ended yesterday) and it sounded like it was about Project Mistletoe (Ian Fleming and Aleister Crowley vs the Nazis), which I got interested in for about three hours a couple months ago, but it was much more outre than that. I guess I like my fantasy elements suppressed.

The Good Place - season 1 and about 5 episodes of season 2 before getting bored.
The End of the F***ing World - season 1 (basically just a feature film split into eight 22 minute episodes)
...and finishing off Easy season 2 and Black Mirror season 4.
at 8:49 PM No comments: