So we had a son in late April. We named him Caio -  a nod to those of his roots that are Italian (and a dozen other subsidiary factors that seem trivial when explained). Then we discovered some phones autocorrect this to "Ciao". Even when autocorrect doesn't intervene, some still misread it as "Ciao". Oh well.

We fuck them up, the mums and dads.
We may not mean to, but we do.

So the essay I wrote after reading about e-sports and video game spectatorship (see my last post) that went up on the Horoeka site last week.

So I'm not sleeping much. When I'm able to get up at 5am, I'm doing work-work. As in "Craig Cliff, Senior Policy Manager, Education Infrastructure Service" work. Not "writing a short novel about a location scout in Italy retracing the life of St Joseph of Copertino" work. Yet.

So my story about a Kiwi at an ANZAC day barbeque in Perth, 'Recessional', was published in the Griffith REVIEW in April.

So I went to the inaugural conference for the Historical Novel Society of Australasia in Sydney in March. It was equal parts interesting (so many panels about hist-fic - couldn't help but read new ground) and excruciating (being the 'host writer' at a table for the conference dinner was not a good idea).

So I bought a little city (it was Galveston, Texas).

So I went to a conference in Canberra about designing school facilities in May. At a dinner at the National Arboretum I met a young architect called Caio.

So I saw Ned Kelly's death mask at the National Portrait Gallery in Canberra. 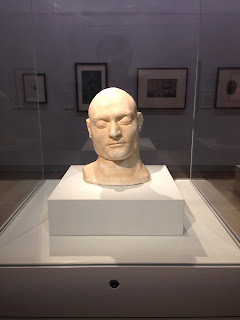 So my story 'Copies', written way back in the Summer of 2006/07, was translated into Spanish and published online in March ('Copias').

So these days I have a two and a half year old and a baby whose age is counted in weeks. My daughter's a sponge. The other day she saw leaves over the ground and said, 'It's a deciduous day, today.'