The crash is over. I sent THE NOVEL off to my editor at 10am this morning. So, like, 14 hours before my deadline. Legend.

Of course, technically the end of August was my second deadline. Sticklers might point out that I missed my first deadline by nine months. Ah, sticklers, who needs 'em? Not me.

I declare today Stickler Free Day. And what better way celebrate than with a wee Q&A...

Are you happy with the finished product?

'Finished'? Eep! I prefer the term 'complete'. It has a beginning, a middle and an end. But a novel is never finished. My novel certainly is not finished. Someone is going to get their hooks into it in the coming weeks and at some point in the future I'm going to get it back with a list of everything that's wrong with it and the get not-a-lot-of-time to perform corrective surgery.

Also, not a big fan of the term 'product'. Sound like something my brother puts in his hair.

But are you happy?

Yeah. Mostly. It'll never be what I thought it was going to be when I set out. Or even what I thought it'd be when I was halfway. The last quarter came together really quickly and went down some paths I would have shirked earlier on in the process (it got a quite rural, almost Western, at one point; a bit Flowers in the Attic at another). But it's what was demanded by the engine I built.

I'm pleased the ball is in someone else's court now. I've been working hard, both on the novel and my day job for quite some time. This last month has been kind of crazy. If I spent another month or two on the manuscript, I'm not sure I'd make it any better. I need to step away, see what someone else thinks.

How did revision go these last three weeks? 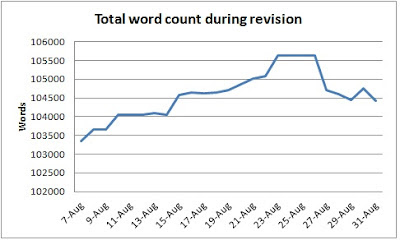 Of course, this only shows the net result of all the additions, deletions and changes on a given day.

Here's another way of looking at the same data: 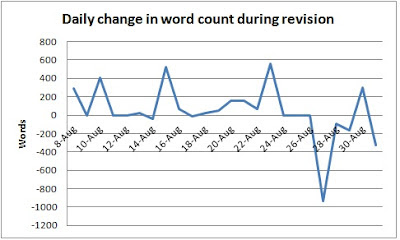 The first few days were about adding in little details and reading aloud. I was actually quite surprised at how the word count kept climbing. I thought I would be trimming more than adding.

That flat patch 23-26 August was when I was reading and marking up a paper copy. There was a lot of "cut" written in the margins, which explains the sudden drop in word count when I finally went back to my PC.

I went through looking at whether I said characters' names too much instead of using pronouns. The next day  changed half of the "he"s and "her"s back to "Kemp" and "Mother".

Then there was the period I fell in love with semi-colons and the day I decided to get rid of them all.

Some other chestnuts:
The last week has been brought to you by the Control key and the letter F.

Wow, sounds exciting. Is writing a novel really as sexy and rewarding as you make it sound?


Don't forget healthy! Sure, my eyesight has deteriorated markedly in the last six months, but staring at computer screens for sixteen hours a day would make them better at focusing, not worse. Right?

And sure, I've put on *mumble mumble* kgs since I started the novel, but I'm just reflective of a national trend towards obesity. I'm sure the politicians will sort it out.

The internet. I couldn't have done it without her.

Some questions I've asked her recently:
What did your editor say on receiving your manuscript?

Nothing. I got an out of office reply.

What are you going to do now?

Last gasps / Orphan Master / Something for the Crash

Okay, so I thought I'd started my crash already, but it seems I'm going to write one last post before my deadline at the end of August...

Today I wrote the final word of the final scene of the first draft of THE NOVEL. That'd be the 103,359th word according to MS Word.

As I've mentioned before, I revise as I go, so it's quite a polished first draft. I think. But the fact remains that tomorrow will be the first day I read page one knowing what happens on page 238.

Something for the crash

After reaching THE END, I went and did the dishes and vacuumed the house. Badass, I know. Just wait till I hand the manuscript in!

While I channelled my domestic god(dess), I listened to the final chapters of Adam Johnson's The Orphan Master's Son, a novel about contemporary North Korea.

It's a great book and it worked well as an audiobook. This is a novel about the power (and dangers) of storytelling and at times it felt the theme was paraded too brazenly. And all of the narrative juice is used up before the novel actually closes (about 90% of the way through to be vaguely specific). But I was transported, tempted and entertained. Definitely one of the best books I've consumed this year.

Okay. That's that. See you in September. 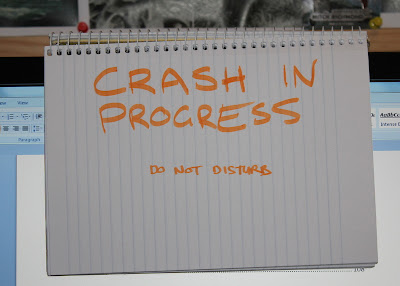