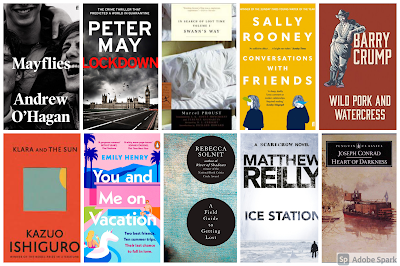 So I've now read Proust. Not all of À la recherche du temps perdu, but the first volume feels like enough. I enjoyed the first, second and fourth parts, but found the longest section focussed on Swann and Odette's romance tedious and uneventful. Which could probably be levelled at the other sections, but the humour was different (yes, Proust is funny, who knew?). There's a kind of peril involved in the narrator's subtle digs at members of his family and their circle, but that thrill evaporates in Swann's tale.

So good. A top ten book of my reading year for sure. Friendship, youth, music and loss all intertwine. 1980's Glasgow and Edinburgh shine through, as does this novel's winning heart.

A Field Guide to Getting Lost by Rebecca Solnit (essays, audiobook)

I read this after reading Solnit's amazing 2019 essay, 'When the Hero is the Problem', which describes something I've been mulling for the better part of three years (I wish I'd found the essay sooner!!). Nothing in Field Guide showed out in quite the same way, but it was good all told.

A Christchurch husband and wife crime-writing duo are embroiled in a true life crime that could have sprung from their imaginations... or did it? Lots of twists and the depiction of Christchurch and the dubious morality of writing kept me engaged.

Lockdown by Peter May (novel, audiobook)

Written in response to Avian Bird Flu but rejected by May's publisher as too outlandish... then released during the COVID-19 pandemic... Thing is, the bits he got right weren't really things I wanted to relive and the bits he got wrong hit like bum notes. In the end, just a middling detective tale with a prescient premise.

You and Me on Vacation by Emily Henry (novel, audiobook)

I really liked Henry's previous book, Beach Read, and thought I was becoming an undiscriminating fan of the romance genre... but this one didn't do it for me.

Klara and the Sun by Kazuo Ishiguro (novel, audiobook)

Um... this book felt like it was produced by an AI trained on Ishiguro's oeuvre. The artificial friend seems like a premise rejected before he settled on clones in Never Let Me Go. The slow reveal of genetic modified children and [spoiler] is Klara's version of the fascistic elements in Remains of the Day. But mostly, the clouded, fuggy feel of the The Unconsoled hangs over this one - less of an intentional artistic choice and more a sign this isn't the writer operating at the height of his powers.

Rather than dive into Rooney's new book with the terrible title, I went against the grain and read her first novel. It was aight. I felt her short story 'Mr Salary' had more in it in less space.

The book that the film Hunt for the Wilderpeople was based on. I read this one to a) see how closely the film followed the book (I'd say the resemblance is two-thirds, with the new third being the injection of Waititi's zany humour), b) to see what a Barry Crump novel was like (a lot of hunting and bush-bashing hung over the wire-frame of a plot) and c) to see what the quality of the audiobook was like from newish local producer Audiobooks NZ (it was good... maybe even flawless).

I read this book because a) it was the free book from Audible for October, b) someone's dad once raved about it and I really didn't rate their opinion but I'm all about testing my prejudices (see my journey with the romance genre this year)... Turns out this was exactly what I thought it would be, which is NOT MY CUP OF TEA.

I re-read this because I wanted to write a novella and thought maybe I could use a frame narration similar to what Conrad used in Heart of Darkness, which I studied in high school. I listened to the audiobook narrated by Kenneth Brannagh and read along to the ebook on my phone... it was interesting to come across all the phrases I'd highlighted or been spoonfed by my English teacher and then regurgitated in essays and exams. In the end, I abandoned the frame narration idea and started writing the novella (though I might still come back to frame narration, it's early days, but there's no reason to deliberately echo Heart of Darkness).

But man, could Conrad write!?

Ted Lasso - Season 2 - like many, I missed the unremitting niceness of Season 1

Quite a bit of NFL (for the first time in a decade I seem to be interested) and NBA (the Kings are 1 game above .500 baby!)