It seems likely a couple of old timers will crack my top ten albums of the year list, namely Alejandro Escovedo and Richard Thompson, both of whom released cracking efforts in recent months. I've also been listening to St Lenox's new album, Ten Fables of Young Ambition and Passionate Love, since I got sent an advance copy in early Sept. It didn't grab me as quickly as 2016's Ten Hymns from My American Gothic, but it's definitely a grower. Sometimes it takes a while for a cold fish like me to get love songs.

A couple of years ago this would probably have ticked too many of my pet hate boxes. Protagonist is a writer? Check. Revealing who the narrator is as a twist at the end of the novel? Check.

Maybe I'm softening. Or maybe the charm of Greer's novel was sufficient to overcome my native cynicism. 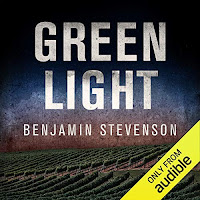 An Australian crime novel that is getting a big push on Audible. I liked the sound of the set-up: true crime podcaster turned TV producer gets embroiled in the case that made his career.

Unfortunately, the podcaster/producer aspect was quickly backgrounded and it became a pretty standard affair.

Rausing, the publisher of GRANTA, writes about her brother and sister-in-law's drug addiction, ending in the death of her sister in law.

But there's very little about the addicts, and a lot about  addiction and its impact on family, and Rausing's own life and memories.

All finely told, but stringing out a GRANTA-style personal essay to book length memoir made it feel a little... thin.

How to write about music, Edited by Marc Woodworth and Ally-Jane Grossan (non-fiction)

Subtitled "Excerpts from the 33 1/3 series, magazines, books and blogs with advice from industry-leading writers", I bought this book because I wanted to submit a proposal for the open call for the next batch of 33 1/3 books. There's a whole section at the end called, "How to pitch a 33 1/3", which was helpful (but probably not essential).

Despite loving the 33 1/3 series (pocket-sized books about a single, significant album) I was pleased by how much more wide-ranging the sources were, and fairly steamed through the book.

Between the world and me by Ta-Nehisi Coates (non-fiction, audiobook)

The audiobook is read by the author, and I can't imagine receiving the content without Coates' delivery, which sounds a little like slam poetry, only tolerable. The only times I cringed were at the truths Coates delivered with such clarity.

While not everything about US race relations can be applied elsewhere, at a little over 3 hours, it's essential reading/listening for anyone.

The narrator here, Simon Prebble, is one of Audiofile's 'Golden Voices' and one of the 'Best Voices of the Century'. I'm not sure how many books I've had him read to me, but I know for sure he's narrated Dickens and Jasper Fforde, and it's the echoes of these two authors that I struggled to shake when listening to de Witt's take on a vague bygone European fable. It's not as obviously funny as Fforde, and not as gripping as Dickens - the stakes never seemed that high - so I never felt swept away.

Better Call Saul (Season 4)
Maniac
Get it to Te Papa
Patriot Act with Hasan Minhaj
Tickled
Dark Tourist - Season 1 (finished the season after not being that taken with 1 ep in August)
The Most Unknown
Definitely Maybe
The start of the NBA season (can it be the Kings are not a complete trainwreck? current record 4-3 with another game this afternoon... I still think Bagley over Doncic was daft, but let's see where they stand at the end of November).

September was a busy month. So much so I'll defer my usual Consumption Diary for another day and just cover what I got up to.

*Spoiler alert* There's no major news on the novel front.

As of Monday, the manuscript is back with my NZ publisher, after working through a useful set of comments over the past few months.

I feel better about the whole process than I did at the start of August.

Pretty much from then on (with the exception of my Dunedin-Feilding Writer-in-Public long weekend, see below) I got up at 5am seven days a week and every day I did at least one small thing to make the manuscript better.

That incremental betterment leads to a funny kind of high. Maybe it's the lack of sleep, or the lack of free time, but I felt I was riding a wave of dopamine to this latest finish line. Not the kind of offshore break you'd see Kelly Slater ripping back and forth on. More like the glorified ripple on a lake from a dingy with an outboard puttering by in the distance. But when there's not a lot of other excitement knocking around, it's noticeable. And now that I've sent the manuscript back and I'm faced with three months of deferred life admin, it's sorely missed.

What am I going to do next? Well, life admin aside, I'm working on a pitch for a 33 1/3 book because #lifegoals. The pitch window closes at the end of October and I have to submit a sample chapter and a whole bunch of other peripherals.

What album am I writing about? You'll just have to wait and see.

Earlier on in September, I went to Dunedin for the 60th anniversary of the Robert Burns Fellowship.

It was weird being back in Dunedin eight months after I left: it felt both longer and shorter at various points over the weekend. I also felt like maybe every time I go back it will make me sadder and sadder because the place will be so tied up with my 2017 experience, when my kids were 4 and 2. And even now they're just 5 and 3 and it's ridiculous to feel time slipping away, for the first time I did understand the impulse to have more children: it's nothing about the children per se, it's just your own devious plan to never grow old, or at least, never stop being the parent of preschoolers.

When I wasn't totally overthinking life, mortality and fatherhood, I had a blast.

It was cool getting to hang out with such a distinguished bunch of writers as was assembled for the Burns thing.

It's not often that many writers get together outside of writers festivals, and even then its only the writers with a new book to shill (and who festival-types deem bookable). But there was no need to shill anything this time. Very little ego involved. A lot of generosity. The dinner on the Friday night was such an uplifting experience. It got me wondering if a true writers' festival (emphasis on writers and that possessive) would ditch the punters completely...

Not that there wasn't a bunch of things put on for the public. There was a big lunchtime reading and two different exhibitions were launched that related to the Burns in some way (one at the Hocken, the other in the Uni Library's Special Collections).

I ran a workshop/AMA session with some third year writing students and did two events that were claimed by both the Burns festivities and the NZ Young Writers Festival, which was running at the same time: a workshop about writing machine-assisted poetry, and chairing a panel on the scariest children's books ever.

It wasn't that hard to jump between the older, more distinguished world of the Burns Fellows and the younger, more ragtag world of the NZYWF - I'm used to not really fitting in. Too square, too edgy, too young, too old, too rich, too poor, too white... too conscious of whiteness.

Too Wellington, too Manawatu

On the Sunday morning I flew from Dunedin to Wellington and drove straight up to Feilding as I was appearing on a panel at the Manawatu Writers Fest at 4pm.

(My two outings as a writer this year just happened to be on the same weekend. I didn't realise until after I'd double-booked myself, but it all worked out.)

My panel was about getting your manuscript to the finish line and I managed to make it to the starting line with an hour to spare. The next day I ran a workshop about how to write short stories that stick with a reader.

It was disappointing to learn, in the days leading up to this year's festival, that their efforts to have a sizeable Maori component of the programme fell through, and as a result the remaining sessions did look overwhelmingly white.

The whole thing seemed to be run on a lot of goodwill and volunteer commitment. Organisation didn't strike me as a strong point throughout my engagements, so I can see how the whitewash happened. But as I boarded my flight from Dunedin I did strongly consider not even driving up to Feilding. At one point, the tougher decision seemed to be whether I'd say something online about why I pulled out or if I should just keep it to myself and be comfortable with that choice.

Because there's no excuse for a festival to be that blind/that naive in 2018.

Okay, so you wanted to have a half-day hui on Maori lit, and yeah, maybe it was a bad idea to just have one person responsible for organising that part. But surely Maori writers shouldn't have been ghettoised in their own panels outside of the hui. And what about the Pasifika writers, the Asian New Zealanders, the immigrant and refugee writers? Where were they? (If you want to play that game, there were a couple non-Pakeha writers on the programme, but really, you want to die on that hill?)

But in the end I did go. Because I wanted to see what it was like, and I wanted to see my mum, who lives in Palmerston North. And from what I'd read, the festival had tried and had admitted its failure and committed to do better next time, so what would me acting all superior have achieved? Bupkiss.

The festival was as lax as I'd supposed, organisationally. But the audiences were incredibly engaged (and pretty diverse). And the vibe wasn't fraught. There was an energy you don't always get a literary events. Avidness? Voraciousness? They seemed to be savouring every minute, and drawing links between what people had said in different sessions, like the secret to great literature had been broken up and tiny fragments given to every published author and the secret to joining their ranks was to gather as many fragments and arrange them into your own cogent structure... Which doesn't sound that ridiculous when you think about it.

My short story workshop probably had 40 people in it and we managed to make it work.

And it all made me feel a little bad for wishing for a Writers Festival without the public.

Maybe I'm just over Wellington and how self-important everything is here...

Or maybe there's something special about regional arts initiatives, where events are low-cost or no-cost (everything at MWF was FREE), and they don't get things right but they try, and so long as they learn from their mistakes and are better next time, maybe we shouldn't get all Wellington on them.
at 10:01 PM No comments: