Some notes I made myself before writing another book review

Maybe it’s because I egged the universe on with my digression on the art of reviewing in my last post. Or maybe it really is that the book world hibernates between November and late Feb. Whatever the reason, I opened the door and more reviews of The Mannequin Makers came marching in.

First, some oldies I missed from the Oamaru Mail and Gisborne Herald in August and M2Woman in October (basically an abbreviation of the blurb and a rating of 3.5 stars - informative, huh?).

(I once flicked through M2Woman's brother publication, M2Man (naturally),  in my dentist’s waiting room, specifically looking to see if they do book reviews (they did that particular edition, but they were both non-fiction; they also reviewed DVDs and video games). It’d be nice to one day be reviewed in M2Man, even if it's a glorified thumbnail ad... but I can see why a book that revolves around two department stores -- despite it’s long, briny excursion into sailing and shipwrecks -- doesn't scream out manliness.)

The first was in New Zealand Books new issue (Autumn 2014). It’s a triple-billed review, with my novel sandwiched between Duncan Sarkies’ The Demolition of the Century and Summer Wigmore's The Wind City. It’s a good review, I think. Both favourable to the book and well-written.

One complaint: "Cliff suffers perhaps from first-time novelist's compulsion to cram every possible image, experience and idea into a too-small space." 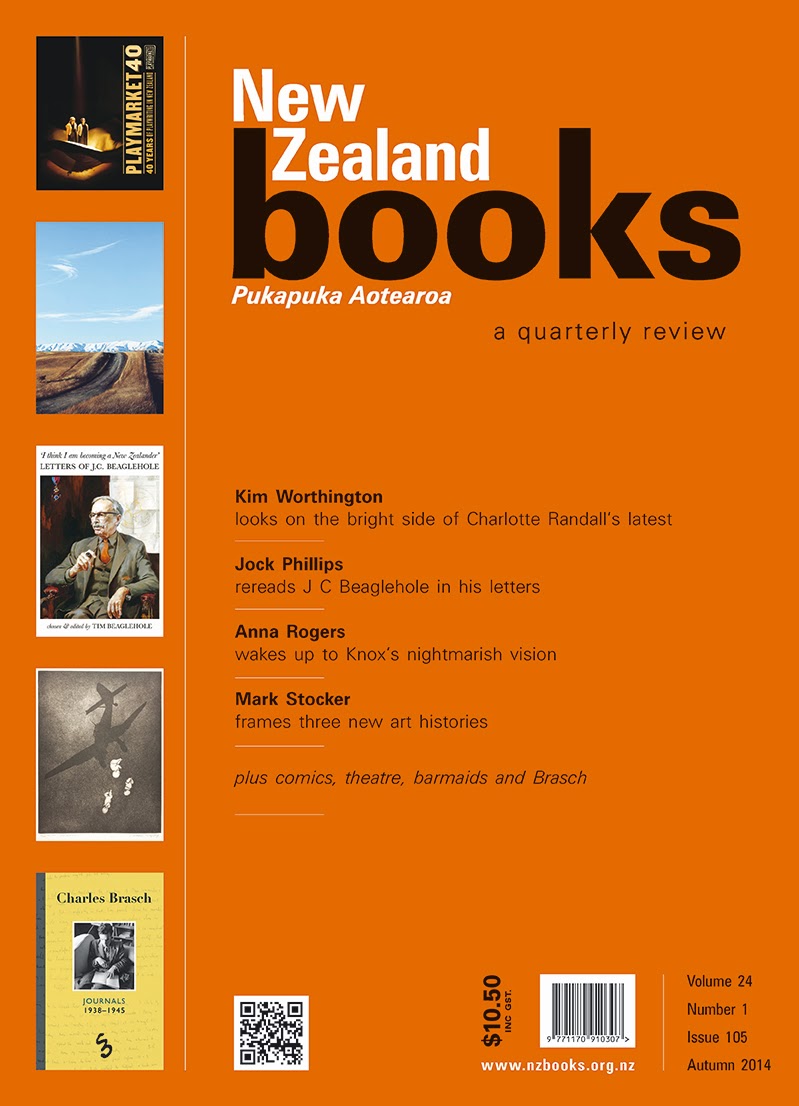 I’d rather a reviewer said, ‘The book crams a lot in and I found it too much at points A B C, because X Y Z’.

Or, dream scenario, when an author has another book (even if it’s not a novel) the reviewer investigates to see if this maximalist impulse is present elsewhere and comes to a conclusion about what this means for the novel’s shape, themes and overall effect.

But like I said, it’s a good review all told. Especially when held against the other new review, which appears in Landfall Review Online.

The review is long. Nearly 2,000 words. And while it’s nice that the reviewer spends so long on my novel, the bigger compliment would have been to spend longer and write a shorter review.

Again, it's largely favourable, but, well... I'm probably the most interested reader this review could hope for and, despite multiple attempts, I've never managed to read it the entire way through.

Try and read this sentence while retaining the will to live: "Occasionally, despite genuine mastery overall, the prose packs in over-much explaining, but not often."

And the reviewer mentions the cover and the engravings of birds at the start of each of the four parts of the novel and internal design. (I’ve blogged about how little say I had over my cover.) Wasting breath on this stuff represents a totally superficial way of appraising fiction, as if they really are reviewing a book – a physical object, a commodity to be bought and shelved – rather than effect the words create. Perhaps if the reviewer asked the question, ‘What do these different birds at the start of each part signify?’ the thought process might result in a worthwhile and enlightening paragraph.

Anywho. Enough shit talking. Any coverage is good coverage. I'm off to drink free wine...
at 4:01 PM No comments: