Where it's at (I got two book covers and microphone)

On Monday I couriered the final proofs of The Mannequin Makers back to my publisher. There were still a number of things that needed cleaning up - formatting stuff mostly.

This morning I went through a dozen or so queries from the second proof reader (11/12 queries resulted in tiny tweaks).

Now all that remains is to check a PDF to make sure all the changes have been made and that's the text settled. Finally.


The Playlist (for this last stretch of editing)

I neglected to mention back in March that Random House Australia had agreed to take their own edition of my novel rather than just import NZ copies. (This made me happy as it increases the chances of getting reviews/coverage over the ditch.)

At the time, RH Australia said they'd use "the same files as RHNZ" (same text) and would probably use the same cover but can't guarantee it "as covers go through a lengthy committee process here." I read this as a piece of expectation management: 'Even if you manage to get a cover you love with RHNZ,' they seemed to be saying, 'you might not get it with us.'

In the words of Kylie Minogue: I should be so lucky. (Hey, if I'm gonna be interviewed in Australia, I'll need to get used to refering to their cultural icons instead of ours... sorry Shona Laing.)

Later in March I wrote about how I wasn't a fan of the cover Random House NZ had their hearts set on (or any of the other covers the designer had presented them), but had come to accept being overruled.

It seemed this cover was set when it appeared on the RHNZ website, though the thumbnail did say 'Not final  jacket'. 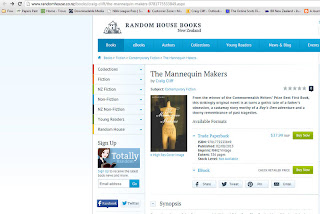 Then, ten days ago I got an email from Australia after weeks of radio silence: "We continue to work away to come up with just the right cover for The Mannequin Makers and will send you through what we have when we get something we are happy with!"

Well, I thought, maybe I'll get one cover I like. Or maybe Australia's will be even worse!?

Last week I got a look at Australia's preferred cover and oh the relief! I liked it. (Though a few hours later I had to wonder if I'd been conditioned to like it after disliking the first cover so much...).

I also got an email from RHNZ saying the Aussie cover had been passed on to them by their Managing Director (who looks after both NZ and Australia), "as she thinks [the Aussie cover] has wider appeal than where we had got to." However, the NZ team thinks the black panel "is a bit dated" and want to work on the design "a bit further".

Right now, we're in cover limbo. As of this morning, if you go to the novel's page on RHNZ's website you'll still see the old thumbnail pictured above, but if you click on the thumbnail, or click on one of my other books, the image for The Mannequin Makers changes to the Aussie cover. 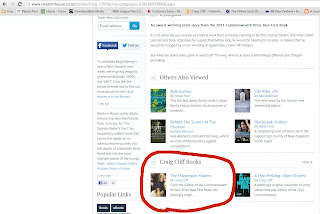 I'm just a passenger in all of this. It's pretty funny, really. In all, I'm stoked Australia and New Zealand are working together to make sure the final product is a good one, and they're both trying their best to ensure it finds as many readers as possible on both sides of the Tasman.

As the second-most anticipated sophomore book by a Kiwi fiction writer to be released in August, I'm sure the world is waiting to hear my plans for the launch event. (I could be wrong. There may be someone else releasing their second book that month, in which case bump me down to third-most anticipated).

Well, I'm meeting with the publicity manager of a certain venue tomorrow morning to discuss the possibility of them hosting the launch of The Mannequin Makers in late July/early August. Can't say much more at the moment, but if things fall into place it'll be a bit different from your average Wellington book launch. And there may be something a bit extra in the days before and after the launch.

I'm going to write a short story, but I've got such a long list of story ideas I fancy writing and I change my mind daily about which one I should write first. So I'm going to crowdsource that decision in a blog post soon...
at 2:13 PM No comments: 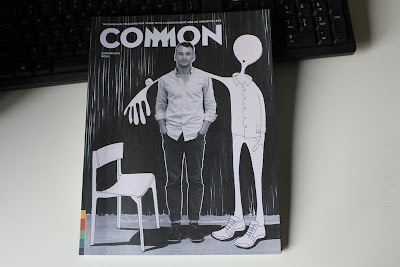 The first ever issue of Common, "The biannual magazine for those with a creative bent and an inquisitive eye", arrived at my house a while ago. It looks a million bucks and was helped into existence thanks to a Kickstarter campaign. Here's hoping there's a second issue (and a third).

Inside there's an interview with me that includes the question: "What do you like about photographing birds?" and, coz the mag has an arty/visual bent, goes on to include a couple of my bird photos... 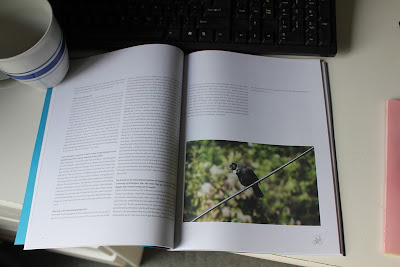 Regular readers of this blog will know about my birdy-bent, and may have even noticed the lack of bird photos of late. Well, dear readers, it comes with the lack of posting.

I did manage to take this photo of three silvereyes out of my bedroom window the other day. Anyone who has tried to snap a single silvereye will know how tricky the buggers are to capture, but three in one frame, in focus? I was stoked. 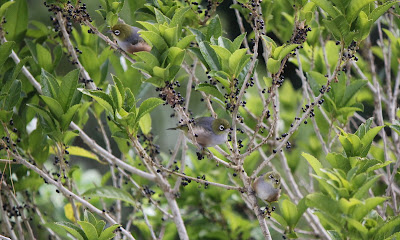 Instead of being behind the camera or at my writing desk, it's been the dayjob, the bike commute (see today's Your Weekend column), fatherhood and the occasional piece of housework-cum-modelling... 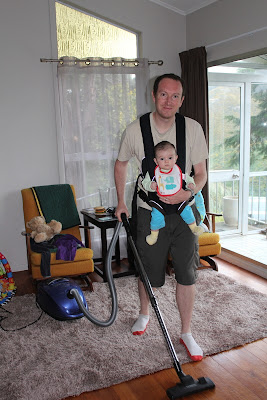 I've been a grumpy reader these past few months. It's probably to do with the fact I haven't had much time for books (biking to work means I can't listen to audiobooks as often as when I rode the bus) and I've spent so much time re-re-re-re-re-re-reading my tedious, flaccid, opaque, snore-fest of a novel (remind me to hit reboot on my emotions re: THE NOVEL closer to the launch date).

So Brave, Young and Handsome by Leif Enger (novel, audiobook, US)

This was okay. A bit sprawling and unfocussed. And what/who the heck does the title refer to? Hood Roberts? You mean the fourth most important character? Or am I missing something? Surely I missed something.

Listening to a play on your iPod should work. I mean, it’s better than reading a script, surely. But, for me at least, listening to a play is a sure way of making it seem thin and lifeless. Sorry Tom S, but this was nowhere near as good as the real thing.

My god, the prologue! What a bore. At least old PD will hit her straps in the first chapter: a dead body, a cast of shifty upstairs/downstairs characters… But no. The text kept circling back to moments “six years ago” (i.e. stuff that happened in Pride and Prejudice), as if this was one long, insufferable cliff note on Austen’s novel. And when death finally came to Pemberley? I wanted to shake the hand of the perpetrator!

The Thing Around Your Neck by Chimamanda Ngozi Adichie (short stories, Nigeria/US)

These stories did little to arouse any great feeling in me, except perhaps 'Jumping Monkey Hill', which played with the idea of writer’s conferences, the colonial influence still existent in ‘African’ writing, and the old story-within-a-story trope. Things were laid on a bit think with the lascivious, condescending, decrepit English patron of the workshop. Like many of the stories in the collection, he felt functional, formulaic. And there were two - repeat: two - stories written in the second person. I'm sorry, but that's now way to win me over.

We others, new and selected stories by Stephen Millhauser (short stories, US)

Hey, I actually liked this one. I’d read Millhauser before, but clearly not his collection In The Penny Arcade, which features the story ‘August Eschenberg’. It’s a darn good story – insofar as it’s masterful and anyone would be proud to have it in their back catalogue – and it’s got A LOT in common with my quaint wee novel The Mannequin Makers that’ll poke it’s head out of its burrow in August: department stores, window displays, the quest for mastery, a rivalry between two practitioners, the old art vs life divide. There are a few differences: Eschenberg makes clockwork figures, the dudes in my novel just make mannequins (hence the title), my novel roves widely, Millhauser’s tale is long for a short story, but sticks to its singular focus on the life of its title character. I’d have no problem if I had read this before (or during) writing my novel, because I think there’s worse things to do than be inspired by great fiction, but that’s not the case. Great minds and middling minds sometimes think alike, I guess.

And finally, for no good reason, here's NZ's answer to Gang of Four: