April and May 2018 consumption diary

To start, a bit of news masquerading as an excuse (or vice versa):

I sent the manuscript of my location scout novel off to an agent today.

I've been head down these last six weeks, moving through draft after draft after finally penning the ending in mid-April. Which left little time for reading or watching (or writing about my paltry intake). But all that time writing means plenty music has been consumed.

My plans after today? Keep going hard. When I had a sleep in two weeks ago, after a string of 10+ 5am starts in a row, I felt awful all day. I'm going to tinker with a few short stories and update my CV (shh, don't tell my boss), while I play the waiting game on the novel -- I'm fully prepared to make the required changes through the publication process and am kinda of enjoying the sick-to-my-stomach anticipation this time around.

Camp Cope's debut was one of my top ten albums of 2016. Their new album, How to socialise & make friends, was only a couple of weeks old when their first ever NZ tour rolled around, but I was there, not-quite-front and very-much-not-centre for their Wellington gig. 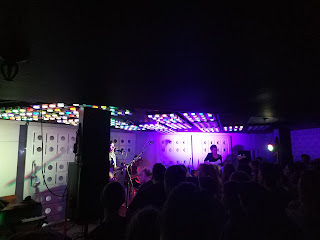 It was a great show. Barring the anthemic 'The Opener' off the new album, the highlights tended to be all the old stuff, including 'Keep Growing' and 'Footscray Station' from their Split EP with Cayetana (by old, I'm talking about songs released in 2016 and 2017).

So the moral of the story is they need to come back next year, too, though the greatness may be fatal.

Weirdly, I'd only ever read Ford's short stories before (I like them individually but his collections tend to get a bit samey).

I liked this, the first of his Frank Bascombe novels, though it took an absolute age to get through. And something bugged me about it, too. I think it's that Bascombe sounds like an Obama speech writer, which the present moment tells us isn't the worst thing in the world to sound like, but that jagged, grandiose grammar is just as much an act as the deliberately typo-laced tweets of the current POTUS.

This is a book no one seems to be talking about - or maybe I missed all the talk? I can kind of see why it didn't have the penetration of Mr Pip or even Hand Me Down World. It's deliberately vague about time and place. It's dark as fuck. And, as often goes hand in hand with such darkness, it's about urgent matters (people fleeing unspeakable atrocities and being treated unspeakably) that both seem to be over- and under-covered at the same time.

And, perhaps understandably, it feels a bit joyless.

Firstly let me say I hate Brannavan for publishing an ungodly amount of books in an unreasonably short amount of time, while having a day job and a family, and doing it outside the usual routes (no VUP/IIML associations here).

This was a worthy short-listee for the big fiction award this year (which Pip Adam won and Bran graciously responded with this review of The New Animals).

In an all-too-believable near future, the US has outlawed abortion and IVF and is in the process of banning unmarried people from adopting kids. Four women (a pregnant teen, a 40-something trying to get pregnant/adopt, a mother of two, a wood-dwelling healer) navigate these waters, while we also get glimpses of the life of an historical Faroese polar explorer.

Where The Cage goes for fabular and generic, Red Clocks is specific and familiar and just as scary and urgent.

An epic historical fantasy according to the blurb. I got bored and abandoned it before the midpoint. Soz.