On the 4th of March I started work to expand my short story, 'Ambient Ecstasy', which I wrote late last year and was published in The Listener as part of their summer reading series, into a short novel. By short, I was picturing 40,000 words. The short story was about 1,200 words.

Disclaimer 1: I was on day three of testing positive for COVID, so the final days of drafting were a little cloudy.

Disclaimer 2: I knew at the time that there were some additional scenes/chapters I'd need to write as part of the 2nd draft, but I'd made it to the end and would need to go back to the start to figure out where these additional bits went. The second half has a different narrative form to the first, with multiple narrators, so there'll be quite a bit of moving chunks around between now and settling on the final form.

Right now, I'm mid-way through a full read-through. This involves noting down things to add in, or sections that need to be sped up, or spruced up, or made consistent with later chapters, and also making some quick tweaks as I go.

The aim is to be done with the 2nd draft by mid-May... and we'll see what's left to do when I get to that point.

16 days into the first draft I released what needed to happen in the second half, and stopped to write a short essay about the realisation and how I'd reconceptualised the book. I'll have to return to that, too, when the book is a little closer to its final form.

It feels good to be writing again, even if it is in 500-700 word chunks every morning before the kids wake up and my days get hectic. And writing through COVID (my daughter caught it first, then my wife, then my son, and I was almost done with my 7 day isolation as a household contact before I tested positive). Day two was the worst: body aches and it felt like I was going to run a big fever, but then day three I felt almost normal, only to get a massive head cold that lasted the next three days. I just have a dry cough now. My brain is slightly muddled, but I figure that's 2 weeks of house arrest with other sickies, while working in between the stat days. 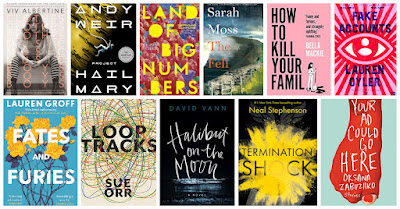 A big, glorious, only-slightly-ludicrous (giant hogs vs meth gators!) examination of what might happen when certain low-lying territories take climate action into their own hands. Goes deep into the science and doesn't do the same for the morality, though this isn't completely shirked.

Another long, hard-leaning sci-fi that I just lapped up. Similar to The Martian, but also different enough. Which do I prefer? Maybe this one?

I started reading this as a physical book but anyone whose read one of these consumption diaries knows I struggle with physical books these days. The act of reading sends me to sleep, regardless of the content.

So I restarted this as an audiobook when it appeared on Audible and man, it was so great.

Lot's of the coverage focussed on the early section of the novel when abortions were illegal in NZ but not Australia, but the later sections, set amid the first nationwide COVID lockdown in 2020, were a triumph in their own right. I think in twenty years, it'll be interesting to see which parts people focus on.

As an aside, man I wish more NZ books were available as audiobooks!

Halibut on the Moon by David Vann (novel, audiobook, 2017)

Oh, what's this? Another NZ book? Well, it qualified for the Ockhams in 2020 and made the fiction short-list, by virtue of a) Vann being an NZ resident and b) the book being crazy good. It didn't win (Aue by Becky Manawatu did), and probably wasn't a great look for our biggest book prize to go to something set in the US by a US national... But as I say, it's very, very good.

David Vann has written this book a few times. From the amazing story collection Legend of a Suicide to Caribou Island and I think a few others (honestly, I got a bit tired of it all for a while there)... but Halibut manages to traverse the same ground (retelling the author's father's suicide, this time sticking only to the father's perspective) in such a sharp, manic way. He feels like Thomas McGuane or Barry Hannah protagonist. And knowing how this story has ended before, and the rug that was pulled in Legend, there's an incredible extra-textual tension.

I still probably rate Legend higher, for the way it plays with the story collection form, but if you prefer novels, you might want to start here.

Really enjoyed this. I remembered The Slits cover of 'Heard it Through the Grapevine' but that's about all I knew of Albertine's career in punk. It was facinating how connected she was with acts like The Clash and the Sex Pistols, and what happened after the Slits broke up, and her return to music after the housewife interregnum.

I wanted to like this more than I did. Maybe I just don't have much love left for the kind of epic, smartypants American novels (think Donna Tartt and Jonathan Franzen)? So much of it just felt false. Sometimes I like false. Even inside the book, the falsest part (Lancelot becoming a famous playwright) was the most interesting. But as a whole...

Yes, I thought I should read a Ukrainian book and landed on this after some research. And maybe it's impossible to be that book people go to for the wrong reasons. Like, say NZ was invaded by Chile (sorry, Chilenos, just an example!), which book should people read? That's the kind of question that can power a decent podcast, but it's not something that actually has an answer. The answer to which book is always the next and then another and then another.

Didn't pick this to read a Chinese novel (someone recommended it to me), and I kind of forgot it was short stories at first. The first story feels like the start of a novel, but not a particularly good one. And then it ends in a non-good way. The next couple of stories are much stronger, but whenever the stories get too journalistic, I lost interest.

Really interesting to compare this lockdown-UK-style novel to Loop Tracks. This is the third of Moss's novels I've read after Ghost Wall (2018) and Summerwater (2020), in part because they are short and audiobooks are readily available. I'm in love with the idea of short novels (see "Writing" above) but none of these quite hit the mark for me. The further removed from Ghost Wall, the more I think it'll end up being my favourite of hers.

Meandering and dull. Felt like the first draft. The get it all out, all the stuff that actually happened and the big thing I invented to make it fiction, so I can then unearth what the true point of it is.

How to Kill Your Family by Bella Mackie (novel, audiobook, 2021)

Really disliked this book. And it's not the sort of thing you want to Google. Just keep moving.

Lost - first 2 eps of Season 1 (thinking of rewatching - never watched all the eps first time around...losts of hints of Damon Lindelof's later shows, but also lots of network elements... and 25 eps a season... Season 1 is almost as long as the full run of The Leftovers!)