Setting A House On Fire

The launch of Tim Upperton's debut collection of poetry, A House on Fire, last night at the Palmerston North Libarary was well attended. For the second time in two nights I stood for the entire launch (thankfully there were only two speakers this time). According to Roger Steele, the publisher at Steele Roberts, it could well have been the biggest crowd at any event on Montana Poetry Day 2009. No mean feat for the launch of a debut collection in a town not instantly associated with a thriving books scene.

But then Tim Upperton isn't exactly an unknown. He teaches creative writing up at Massey, is the former poetry editor of Bravado, and his work has been widely published in New Zealand and overseas journals (including an appearance in Best NZ Poems 2008). 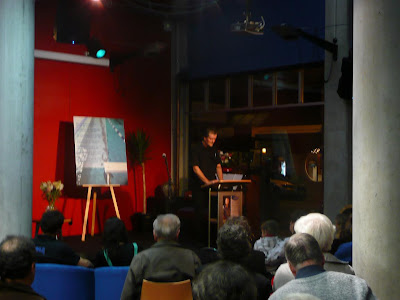 The highlight of any poetry launch should be the reading, but Tim's own efforts were almost overshadowed by Roger Steele's lofty introduction (invoking Keats and Whitman; stealing an poem Upperton intended to read himself). Upperton confessed his affection for difficult forms and rhyme schemes, as these "obstacles in the road" made it easier to produce a poem, rather than begin with unlimited possibilities. And while these obstacles help create intricate, finely crafted poems, I couldn't help feeling they are best enjoyed on the page than read aloud: there seems to be at once too much and not enough happening for the ears to keep up.

Of course, this was just my impression of the five or six poems read at the launch, and my (re-)reading of them this morning.

Expect to hear more of A House On Fire (definite nominee for Best First Book: Poetry if that category still exists in the revamped NZ Post (formerly Montana) Book Awards next year) and Tim Upperton... even if he doesn't quite make it into the Keats/Whitman eschelon.
at 12:06 PM

Thanks for coming along, Craig, and for your comments. I agree - Keats and Whitman are probably safe for now.
Best wishes,
Tim