I like getting away and seeing new places, but I'm not one for organising. It's lucky, then, that M. seems to enjoy researching places to go, following through and making bookings.

In the lead up to Queen's Birthday weekend, she began looking for places to go based on one proviso: the place had to have a fire.

Independent of her quest, I had lifted a story idea from one of my notebooks and begun kicking it around in the sort of serious fashion one does to ideas before finally setting fingers to keyboard. The idea involved a small coastal community - not a golden sand getaway, more of a rough, windblown place - the sort you find in the lower North Island. I began looking at maps, and saw names like Herbertville, Weber and Akitio, which I recognised from the sign when you pass through Dannevirke, but knew nothing more. I realised I'd never been to that slice of the Eastern coast, and thought maybe I could set my story there. But of course I'd done nothing more about it.

Then M. announced last week she'd found a cottage in Weber (30kms east of Dannevirke, another 30 or so kms from the coast). Of all the tiny, nowheresville places, we'd somehow independently locked on to the same patch of island.

I'm not big on serendipity in stories, but when it occurs in real life, it must be embraced.

Our one bedroom cottage was more spacious than expected, and will probably be fictionalised in some way soon. 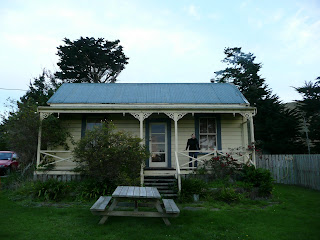 Our cottage
The weather wasn't great (was it anywhere?), but we had a fire(!), and we managed to get to the coast on Saturday. Turns out Akitio looks like the "small coastal community" I'd begun sketching in my head, down to the murky river mouth and driftwood strewn beach. 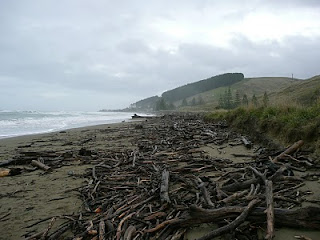 Akitio
I also had my closest encounter with a korimako (bellbird), and now reckon I can distinguish the sound of it and a tui (famous last words -- though I'm not sure how getting it wrong could lead to my physical demise).

All I really have left to do is write the story. Ha! 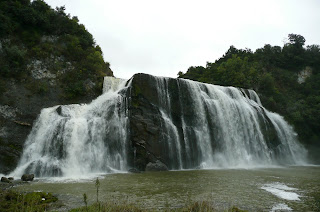