Yesterday was my first full day in Sydney. I went to the Blue Mountains along with the other two regional first book winners, Katrina Best (Canada & the Caribbean) and Cynthia Jele (Africa), for a session called “New Voices from Across the Globe”.

(The fourth regional winner, Mischa Hiller from the UK, was not able to come to Sydney due to health reasons and the three of us have decided it’s best he wins the overall best first book so we can hate him collectively and from afar, rather than it getting all awkward on Saturday when suddenly one of us are suddenly held up as being slightly better than the others).

Our session was at the Carrington Hotel in Katoomba. The session was packed out (the typical sea of grey; one particularly elderly audience member nodded off during the session – at least I hope she nodded off rather than dying...) and we each sold a goodly amount of books (though it was Bird Eat Bird > Happiness is a Four Letter Word > A Man Melting at the signing table if I’m honest).

I read from 'Oh! So Careless' (a risky proposition to read a story that ventures to South Africa next to an SA native...).
The chair for the session was author David Brooks, who’d clearly read and engaged with each of our books; his questions were good in a focussed, stage-managing way, while giving us space to get our own points and personalities across.

So yes, all in all a great start to our Sydney Writers Festival (despite being 1.5hrs drive from Sydney at the time).

After the session we were taken to the nearby Echo Point, and walked down to the base of one of the Three Sisters. A truly spectacular spot, and nice to get a bit touristy for once.
We arrived back in Sydney after dark and were joined for dinner by Aminatta Forna (winner, Best Book, Africa) who was fresh from Auckland, and a couple from the CWP entourage (we writers can’t be trusted by ourselves! We might get lost).


At one point, PR Man/Agent/Avid Phone Call Maker Benython asked Aminatta why some people pronounce the final ‘E’ in Sierra Leone. I was compelled to mention the classic 80’s Kiwi song by Coconut, which no one had heard of, so I ended up singing it... A weird, weird moment.

Today (Tuesday), the three first bookers (and entourage) went to Juniperina Juvenile Justice Centre (I always spell it Juvenal Justice Centre, which would be some guy yelling insults at you in Latin), which is a girls only facility. We did two sets of workshops with 6 girls per session, consisting of a brief chat and Q&A about what it’s like to be a writer / where we come from, then led them through a writing exercise. Cynthia and I had the girls imagine they were shipwrecked on a desert island with a celebrity and they had to describe what it was like 5 hours, 5 months and 5 years after arriving. “Celebrities” ranged from the dude who egged Justin Beiber to Vin Diesel, and the final fates of the various castaways included going mad, making friends with a coconut and living in the trees; becoming OCD about cleanliness after Vin Diesel died from an infected foot as a result of a spear fishing accident; to eating Orlando Bloom when the fish ran out.

Some of the girls were harder to keep focussed than others, but they were no worse behaved than your typical 16-18 year old public school girls. There were a couple of the group who seemed to get a particular kick out of our visit (one girl brought out her notebook during lunch and showed us her poetry). So plenty of positives, though it’s best not to think about what the future might hold for many when they return to the outside world and their families (if they return to their families).


This afternoon we’ve been left to our own devises. Dangerous, I know. The more I’m around the bigger name authors (Howard Jacobsen and his wife are always stalking the halls and lobby of the Sebel) the more it hits home that writers can get away with a lot. I call it Pampered Writers Syndrome (PWS). In Auckland, David Mitchell said that writers at festivals were like seven year olds, liable to wander off in the middle of a conversation or become distracted by something shiny in the distance, with no idea of time or where they need to be, to have no concept of money (there’s always someone else to pay)... We three first bookers are slowly being corrupted, which I’m sure is adding to the CWP administrators sleepless nights.

I took a walk across the harbour bridge, which yielded a good view of the Opera House, but wasn’t that thrilling. 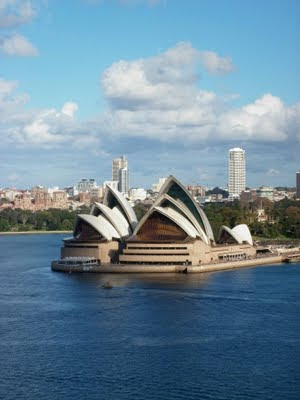 Shortly I’m off to meet the CWP judges for the first time. The writers and judges are having a bevvie before rolling along to the Sydney Writers Festival Opening Addrees: Nation on the Verge of a Nervous Breakdown by Fatima Bhutto, then on to the SWF Launch Party.

Tomorrow it’s two school visits/writing workshops, then another party for me (Random House Australia). I’ll also be recording a video interview for the SWF website and there’s a print interview with the Australian in the works. So yeah, ‘tis all go. But lovin’ it. Just lovin’ it.
at 7:22 PM