Okay, so on Thursday morning I flew into Dunedin, which really means I landed 40 minutes outta the city in Taieri. I then picked up my rental car and gunned it to Port Chalmers for a look around (this may or may not be the first landing point in NZ for one of the characters in THE NOVEL).


Port Chalmers still has a number of buildings from the 1800s, but they were overshadowed by two large cruise ships that were in port.


More about museums, Oamaru and Richie McCaw worship after the jump...


On Thursday I visited three museums in total (Port Chalmers Museum, Otago Museum in Dunedin and North Otago Museum in Oamaru) and a fourth on Friday morning (South Canterbury in Timaru). Port Chalmers was understandably small and filled a nautical niche. I was a bit disappointed by the size and content of the North Otago Museum, but the very informative 10 minute video at the i-site down the road went some way to make up for this.

The Otago Museum was fantastic for what it is, a kind of generalist, Te Papa-style museum with local and national flavoured permanent exhibits (there’s a lot of stuffed birds and skeletons, which is a good thing in my opinion) and plenty of space for temporary exhibitions.

The real surprise for me was the South Canterbury Museum. I’d camped overnight in Timaru (just in time to catch the southerly blast and get soaked in my porous tent) and was in two minds whether it was worth waiting around until the 10am opening time. But the museum has an extensive exhibit about life back in the day (ranging from early settlers up to the 1920s/30s), with lots of kitchen and laundry implements, oral history excerpts and other tidbits which are very useful for a manqué novelist trying to fudge his way through his historical sections.

Despite my museum experience, I greatly prefer Oamaru to Timaru. Oamaru is more dramatic by virtue of its compactness and those limestone buildings (the result of a quick population explosion, a lack of nearby timber but an abundance of stone, and the sudden decline of the town’s fortunes in the 1900s which froze its Victorian centre in time for several years). Timaru is a nice place, don’t get me wrong, but it’s difficult to be inspired by it.

One thing I'm not so keen on in and around Oamaru is the idol worship of Richie McCaw... 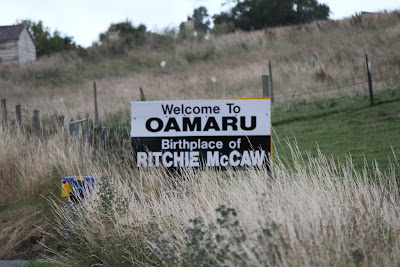 And was playing for Kurow Under 13s really the start of his greatness? 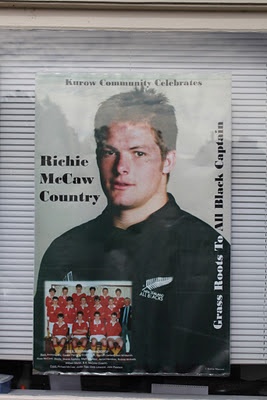 And this... thing, also in Kurow, baffles me. 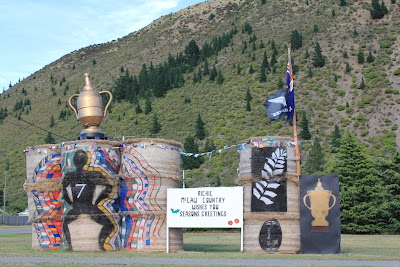 It's almost like he never moved to Christchurch...
at 8:25 PM

When I was a kid, the sign outside Oamaru said "Welcome to Oamaru, the home of Lane's Emulsion".