I’ve named hundreds over people over the last ten years, all of them fictional. Some felt more alive than others. Then my wife got pregnant and we knew we'd have to name something for realz and 4 LIFE.

As with naming a character in a story or novel, choosing a name for our child involved a mix of general parameters and gut reactions.

a) if possible, the name should reflect the Italian heritage of my wife’s family (since the kid would have my distinctly un-Italian surname)

b) the name needs to be easy to pronounce and spell, and not get too mangled by the Kiwi tongue

c) the first name needs to sound okay with “Cliff” – a difficult task with any kind of name, but Italian ones seem particularly unsuited to such an abrupt, concrete surname as mine.

In order to find the baby name El Dorado, my wife and I scoured the internet. Few names of either gender fit all three requirements, and fewer still seemed to meet the gut-check. 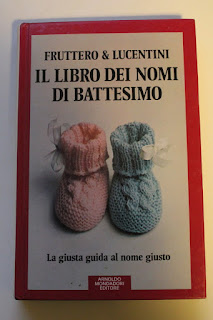 We were then handed a copy of Il Libro Dei Nomi Di Battesimo, a baby name book from 1969 (though our copy was the 1976 edition), all in Italian. My mother-in-law warned us that some of the names may be outdated, but even if we were naming our child the Italian equivalent of Mable or Enid, it’d only be an issue when they travelled to Italy. These things tend to go in cycles anyway.

The names in the book are divided into sections, such as I nomi dei Santi (The names of the Saints) and La mitologia (mythology). One of the sections was titled I nomi pericolosi, which I translated as “Names of danger” or “Dangerous Names”. I checked with my wife and that was her interpretation too. Even Google Translate agreed.

How cool would it be to have a dangerous name? La Tigre Cliff. Toro (Scatentato) Cliff. Nitroglycerina Cliff.

But the actual names listed in the chapter just seemed to be virtues: Audace (bold), Generoso, Modesto. I guess the danger is if Perfetto doesn't turn out to be perfect. And a couple of the names, like Verecondo (bashful), were hard to imagine belonging to anyone but dwaves.

The real revelation for me, while reading Il Libro Dei Nomi Di Battesimo, was how utterly hideous a lot of Italian names are. Some seemed to mean things after which you wouldn’t normally think of naming a child.

Others, like Gugliemina, are about as aesthetically pleasing as a mildewed drainpipe.

I guess I’d always subscribed to the belief the Romance languages were beautiful and expected all the names to be light and lyrical (the girl names at least). And, as we ended up having a girl, I think it’s important she know how lucky she is that we were mildly discerning and didn’t name her any of these gems from the pages of her Nonna’s book:

My favourite has to be that run of P-names. Maybe one day I’ll write a fairy tale where the heroine has six ugly sisters named Primitiva, Proba, Publia, Pudenziana, Pulceria and Pupa… Pupa. I just love saying that one.

So what did we choose in the end?

It’s Italian (check), appearing in the La Bibbia chapter (Bible names: it’s the Italian spelling of Leah). But some websites listed it as also being just the shortened version of names like Rosalia and Angelia. Turns out we both liked short names. And being non-religious this other derivation appealed.

It’s easy to say and sounds okay with Cliff (check, check). Sure, some people may want to spell it Leah, but at least it’s quick to spell out to correct people. Also, very quick to finger spell in NZ Sign Language!

We've already had someone pronounce it Ly-a / Liar, but no name is perfect. (Besides, her daddy does write fiction, so being liberal with the truth ain't the biggest sin.)

I’m sure the time will come when Lia runs home from school crying about the terrible names the boys (who secretly fancy her, how could they not?) have concocted from her name, and hating us, fleetingly, for our oversight.

My reply: “Well dear, you know your mother wanted to call you Ughetta, so you should count yourself lucky!”
at 8:36 PM