Craiggate, or It's no longer paranoia when your fears are realised

The few months before a book launch can be nervy. Chances are publication day is swiftly followed by reviews that miss the point, interviews that misquote you and photo shoots in bright sun (squinty eyes!) or weird locales (hey, how about you pose by this construction site!).

The last few months I've had a very specific anxiety: that people will mix me up with Colin Craig,  leader of the NZ Conservative Party. He's been in the news a bit lately, whether it's promising a day of reckoning after Parliament sanctioned gay marriage, or threatening a satirical news website with legal action for defamation.

At the risk of getting my own letter from Chapman Tripp, Mr Craig is a bit of a plonker.

Unfortunately, his name bears a number of similarities to mine.

(To confuse things further, I have a great uncle called Colin Cliff.)

I told myself it was just me being over sensitive. People weren't that stupid. No one would ever read 'Craig Cliff' and think, "That homophobic, litigious git who shelled out $1.3 million of his own cash for the last election but never got near a seat in parliament?"

I told myself I was being paranoid.

But then it happened. Perhaps the first of many befuddlements.

My latest light-entertainment column in the Dominion Post appeared on Fairfax's news website stuff this morning with the byline "Colin Craig". 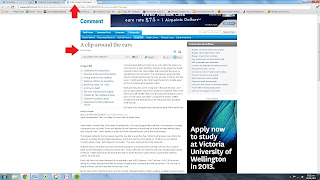 Luckily it was still filed under "Craig Cliff" and the sidebar showed other columns by me. Two astute commenters picked up the anomaly and the Stuff editors fixed it.

In all, the faux pas was online for six hours and I only knew about it for two of those. It was small biscuits. A bit of a laugh really.

But I can't shake the thought that this is not the last time something like this happens this year...

Number of short stories other than the cloud seeder I've worked on: one. Oops. And it wasn't even one of the ten options I put on my poll.


My lips are zipped

Back in October 2011, my to do list included the item: "Say no to something."

I can now cross this item off. I initially said yes, but then I said yes to something else, something bigger, which meant I had to say no to this other, smaller but still exciting and worthwhile thing. Does that count?