Cream of the sun: Fortnight 21 of The Burns

My son was sick all last week, so I had Monday off to care for him (after taking the previous Monday off to be with my mum & step-dad), and the rest of the week my wife and I split time with the sickie   so I could put in 3 or 4 hours on the novel each day and she could keep her experiments on track at her job. There wasn't any sort of manuscript-magnetism at play. It's a slog, but the only way to rekindle the magic is to grind until the next breakthrough, and that means making time when suddenly time is sparse.

If I'm sounding like a stuck record, good. That's how I feel.

The good news is that on Thursday last week I got to the end of tweaking earlier sections so that I can rewrite completely the last 30 pages of the manuscript-so-far (which is to say this won't be the last 30 pages of the novel, but maybe falls somewhere in the 3rd quarter). And I felt positive for the first time in maybe three weeks. Like, maybe people will read this far without throwing the book (or their device) across the room.

The challenge will be keeping up any momentum over the next couple of weeks, with a trip to Wellington to take my daughter for 2x school visits before she starts on day one next year, and then when I get back it's the Creative Cities Southern Hui. I'm also talking to a group of English teachers from Otago/Southland on 1 Dec, so that's another talk/presentation I have to prepare this fortnight. Plus there's more logistics to sort for the move back to Wellington, including what I'm gonna do when I go back to the Ministry of Education (my manager has resigned so Gord knows who I'll be reporting to come February).

And then there's the growing trauma of having to leave this bloody wonderful part of the world.

Today we went to Sandfly Bay, which is only about 15 minutes by car from our house, but thanks to a pretty crazy, duney path down to the beach, is dominated by sea lions rather than humans.

And the only way to get my son to nap these days is in the car, and being sick, he really needed the rest in the middle of the day, so I've been slowly clearing the fog of war from every corner of the map of greater Dunedin. It's crazy how quickly the city ends and you're suddenly atop a hill with a great view of the city, the harbour, the peninsula or some combo of the three.

Luckily my son was better by Saturday night as my wife and I had been booked in for a degustation dinner at Bracken for months. This was the first dinner out as a couple we've had this year/in Dunedin, so it's only fitting we crammed in seven courses... 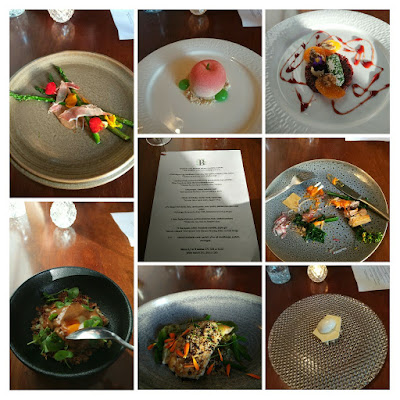 The verdict: there were two deserts, but neither compared with the mini pavs I made for the English & Linguistics Dept morning tea on Friday.

I know, photos or it didn't happen, but I was preoccupied with constructing them on site, and then wham, people arrived and I forgot all about it.

But here's a shot of my trial personal pavlovas (which I decided were too big for single-serve morning tea eat-with-your-hands fare, but my wife's colleagues loved them): 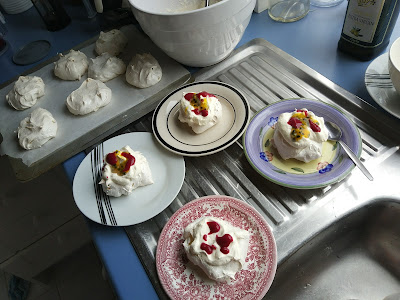