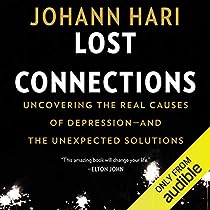 Lost Connections: Uncovering the real causes of depression - and the unexpected solutions by Johann Hari (non-fiction, audiobook)
I have had this on my Audible wishlist since it came out in 2018 but, despite depression marching ever closer over that time, I kept putting it off. Replace "despite" with "because", perhaps. But I read quite a lot of books in a similar vein, glorified, intellectual self-help during that time: How to Change Your Mind (psychedelics), The Coddling of the American Mind (the culture has some things backwards), The Way Home (living off grid), The Book You Wish Your Parents Had Read ("they fuck you up..."), The Happiness Hypothesis... Even something like The Uninhabitable Earth is about depression in one sense (like, how can you not feel down when you think about mass extinctions, desertification and on and on?).
I only finished Lost Connections today so I haven't fully processed everything. There weren't many surprises. Materialism is bad. Big pharma is bad. Contact with nature and other humans is good. But Hari stitches it all together so clearly, weaving in his own experiences with depression and anti-depressants. One refrain through the book is why some people can see the off-ramp but never take it - like Joe, the paint-mixer whose mindless job is sucking his will to live and dreams of becoming a fishing guide in Florida but never does anything about it.
It's what I'm asking myself now. I'm working too much at the expense of everything else because, why? Because I have a mortgage and just a few more years of killing myself to live will be worth it? By which time my kids will have been boiled slowly in this stressed atmosphere, used to being fed and ferried by us but little else.
Something has to change.
In the past I've retreated into a writing project to combat this dread of wasting my life away at the wrong things. Right now, it feels like writing another book is another wrong thing.
But there may be a way to combine the two: the big change and writing about it.
Maybe the change won't be that big. Just a series of small corrections that add up to a better life. Cooking more. Brewing and distilling more (I made by second batch of amazake this afternoon -- through making excess cider & whiskey and sharing it around, I'm starting to understand how fulfilling it can be to provision others). More time in the bush. Doing more for other people. Being in groups more.
There's no shortage of better ways of going about this. It's just a matter of choosing a couple of those things making the time for them.
Hamnet by Maggie O'Farrell (novel, audiobook)
O'Farrell rises to the challenge of writing about Shakespeare's life without making it Shakespearean in scope or language but still making art. I really loved this. Agnes takes a while to emerge as the heart of the story, and overtake the eponymous child, but it's masterfully done. Stephanie Merritt's review in The Guardian covers the main strengths. Just so good. Top ten book of the year with a rocket.

The Martian by Andy Weir (novel, audiobook)
I'd seen the movie staring Matt Damon and remembered the gist (astronaut is left on Mars and needs to survive long enough to be rescued), but I don't remember having any strong feelings about the film (or any Matt Damon film, since Good Will Hunting, for that matter). I only started listening to the audiobook because a) it was the free download on Audible last month and b) Jessica Brody used it as the example of a Dude With A Problem plot in the book I had just read (see below), so I figured let's give it half an hour and see how it worked as a novel.
And I got sucked in quick and finished it in a couple of days.
I'm a sucker for hard sci-fi. This doesn't have the scope of something like Neal Stephenson's Seveneves. We're only a couple of decades in the future and every piece of technology described conceivably exists now. But Weir makes it thrilling and epic, while also keeping a sense of the quotidian, both on the surface of Mars and back in Houston.
Two thumbs up!

Save the Cat! Writes a Novel by Jessica Brody (non-fiction, audiobook)
A different kind of self-help book.
In my teens and twenties I read quite a lot of academic dissections of "plot" (or "plots") and a couple of "how to write a book" books. Brody's is definitely in the latter camp, but it is a descendant of Artistotle's Poetics and I really enjoyed it.
I don't think there's any shame in a writer of any stripe, or at any stage, reading a book like this. I think more writers of literary fiction should be reminded of what makes a good story.
The thing I was most interested in was middles (avoiding flabby ones), and the answer is (predictably) to fix the middle you need to fix the beginning, but also be clear where this is going. I enjoy confounding reader's expectations too much. It makes writing a novel really hard. Good thing I've retired. The Plague by Albert Camus (novel, audiobook)
I put this on hold before lockdown and it became available once things started returning to normal. Still eerie to read with other parts of the world much more impacted. It's a wonder we weren't wiped out by something already, eh?
FILM & TV
Um, err, what have I been watching? I'm going to list the things I can remember from ones that were rewarding/enriching to those that were not... but I'll leave you to guess where the line from good to bad is.
Bluey
Three Identical Strangers
Love Birds
Booksmart*
Yesterday
Time Freak
Hannah Gadsby: Douglas
Hamilton
Once Upon A Time in Hollywood
Ad Astra
Money Heist: Part 1
MUSIC: JULY
at 10:04 PM

Email ThisBlogThis!Share to TwitterShare to FacebookShare to Pinterest
Labels: audiobooks