The two biggies since the last diary:

It feels like more has happened, or at least I've had even less mental capacity than normal. I finished a business case and my kids have been sick for the last two weeks (right now, my wife has taken them both to the doctors for testing, which is hopefully just a big mid-lockdown adventure for them and nothing more), and I'm sure if I sat here I'd come up with more.
But who cares.
I can feel the creative dam nearing bursting point. With thanks to George Saunders (see below), I'm going to write short stories. And maybe some short non-fiction things. Before Christmas. This Christmas.
MUSIC - JULY
BOOKS 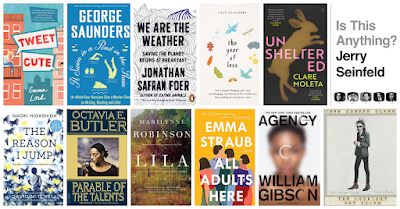 The Reason I Jump by Naoki Higashida (non-fiction, audiobook)
Translated by David Mitchell... feels a little over-translated, making Higashida sound like the narrator of Black Swan Green or the start of The Bone Clocks...
But really useful/interesting/enriching to get a window into the workings of at least one mind on the autistic spectrum.
We are the Weather by Jonathan Safran Foer (non-fiction, audiobook)
JSF buries the lede (this is another stop eating animals book), but is upfront about this tactic when he finally removes the veil.
And it kinda works.
I like the idea of no animal products before dinner time, and how just that could make major inroads into our overshooting planetary boundaries. But like JSF, who tries to be fully vegan but admits to scoffing hamburgers in moments of weakness, it's not as easy as waving a magic wand. And being in lockdown with sick, fussy kids doesn't help.
All Adults Here by Emma Straub (novel, audiobook)
Strong Elizabeth Strout vibes (beyond the shared initials). I enjoyed the novel but it never quite achieved escape velocity from its peers and influences to become it's own, truly memorable thing.
The Luckiest Guy Alive by John Cooper Clarke (poetry, audiobook)
The kind of poetry the excels in the ear rather than on the page. Really enjoyed spending a hour with JCC and his relentless, wry, rhythmic rhyming.
Parable of the Talents by Octavia E. Butler (novel, audiobook)
Part one of: sequels that are hard to get into after loving the first book(s) in the series.
Lila by Marilynne Robinson (novel, audiobook)
Part one of: sequels that are hard to get into after loving the first book(s) in the series.
Is This Anything by Jerry Seinfeld (non-fiction I guess?, audiobook)
After being subjected to the Bee Movie at least 15 times, Jerry's work has wormed its way into my heart in an unexpected fashion.
I was intrigued by how basically cutting and pasting old comedy routines into a book would work. Even odder as an audiobook read by Seinfeld, so it's just amputated stand-up. Kinda served to show how thin & time-bound his schtick is.
Agency by William Gibson (novel, audiobook)
AI, intrigue, future-present. It had all the makings of classic Gibson but to me it just lacked... verve.
Unsheltered by Clare Moleta (novel, audiobook)
Climate refugees within Australia's borders. A separated family. Harrowing, in part because it's so plausible.
The Year of Less by Cait Flanders (non-fiction, audiobook)
Based on year when a blogger gave up spending on non-essential items, but teased that something would happen during the year that was so life-altering that she didn't share it on the blog...
If parents split up.
And it was amicable.
Only kept listening because I thought maybe one day I'd write a romance under a nom de plume about two bloggers on conflicting quests...
Tweet Cute by Emma Lord (novel, audiobook)
Speaking of romances & quests, this YA novel did the job. Maybe there wasn't enough development of the alternative male love interest (Landon), so it all felt quite inevitable. But it was sweet. Like, series 1 of Ted Lasso sweet.
A Swim in a Pond in the Rain by George Saunders (non-fiction with bonus Russian short stories, audiobook & e-book)
SOOOOOOOO GOOOOOOOD.
Maybe I'm starved of down-to-earth literary criticism, but this book was probably the biggest encouragement to start writing again of anything I've read, done, seen or heard this year.
A lot of Saunders' aphorisms I've heard before, though I can't recall exactly whether through podcasts or non-fiction pieces he's written on craft. But it's so good to have it all together here and have him apply these ways of thinking about writing to close reading of some really interesting stories -- and not all of them are totally obvious choices (I'd only read 'The Darling', 'Gooseberries' and 'The Nose' before).
MOVIES & TV
The Olympics (!)
Untold: Malice at the Palace
Fantastic Fungi
Inventing David Geffen
I, Tonya
The Big Year
Crackerjack
Baby Done
Bellbird
Ted Lasso - Season 1
I Think You Should Leave - Season 2
The Movies that Made Us - Season 2
Taskmaster NZ - Season 2
AP Bio - Season 1
MUSIC - AUGUST
at 2:52 PM