The space bar on my laptop went on the fritz as I was battling a deadline earlier this month. Met the deadline (short story submission) but my space bar is still unresponsive for the 2/3rds of its length, as if it had a stroke. The working side sometimes adds two spaces for one touch as if that'll make up for it. FML.

Now I am in Christchurch typing this on my phone in the week between Xmas and New Year's to finish this post. I miss my shitty laptop. 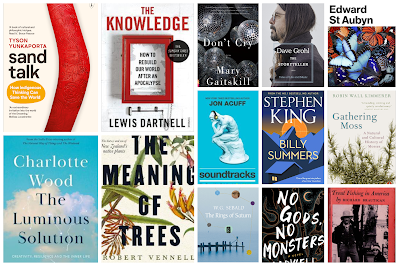 Mary, Mary, quite contrary. Reading Gaitskill is always a good reminder of how much you might be self-censoring yourself and how much braver you can be.

Retiring hitman must pretend to be a writer to pull off one last job... I enjoyed this quite a lot. It was perhaps overlong and there was less of a final payoff than a winding down, but King still delivers plenty from this half-familiar premise.

Sand Talk: How Indigenous Thinking Can Save the World by Tyson Yunkaporta (non-fiction, audiobook)

Wow. Read this immediately after reading this piece by Angela Meyer. Thank you Angela and thank you Tyson (and thank you Audible and I guess, grudgingly, Amazon, for making this book free to all members so hopefully many more will read/listen to this and extend the yarning).

Books like this raise interesting questions about form. As an audiobook narrated by the author it more closely resembles the kind of yarning and sand talk at the heart of the culture Yunkaporta shares, but the listener misses out on the sand talk symbols as visual things (my brain, at least, cannot follow extended descriptions of unique symbols). In the end, all books are imperfect and incomplete in whatever form they take, and it's the work of the reader to complete the circle.

I'll be reading a lot more on this topic from a Te Ao Māori perspective next year and keen for recommendations... Knowing full well there won't be any audiobook versions anytime soon.

More singular in focus than RWK's Braiding Sweetgrass (which will be in my top 10 for the year), but still wider ranging than any tretise on moss has any right to be. More please!

The Meaning of Trees by Robert Vennell (non-fiction, NZ)

My bedside reading. So nice to dip in and read about a tree or two before bed. Makes me want to start and edible natives garden, but being in Dunedin isn't the best climate for a lot of the more intriguing species.

Find this thrilling to begin with (contemporary, unafraid to be intellectual) but the story never truly coalesced and the characters never rounded out.

Acuff makes his living as a speaker (and selling books) that leans heavily on comedy. I found his humour worked well in what is essentially a self-help book about overthinking. Reminded me of John Hodgman, which is a compliment. There's something in the tone and tenor of these dudes I'm trying to unlock...

No Gods, No Monsters by Cadwell Turnbull (novel, audiobook)

There's a sub-genre of literary fiction I'm slowly diagnosing that just doesn't do it for me. Seems to all come from the US. Reads like carefully crafted MFA-workshopped text. Has a supernatural aspect but it's withheld and suppressed and generally never allowed to have a payoff, so that one is left wondering if the writer lost faith in their ability to hold a reader's attention with the realism they actually care about...

The perfect palate-cleansing sorbet after reading something that feels overcalculated and dead on arrival.

I think I'm going to extend the short story I mentioned above into a short novel that is a bit Brautigan, a bit Jenny Offill & Patricia Lockwood & Ali Smith, and a bit Kurt Vonnegut... We shall see.

I think this book has a bad title. Dave Grohl isn't a good storyteller. Stories in the 2nd half of the book revolve around meeting other famous people and good versions of these stories would have some reversal of fortune (Paul McCartney is rude to Dave's daughter rather than the lovely bonus uncle who teaches here piano) but everything keeps coming up Dave.

The early life and career bits were engaging, but the caginess post- Nirvana leaves a lot of drama unspoken.

Written as a series of prices on craft and pulled together during the pandemic, I found this really great, but a little disjointed (there's a lot of references to Wood's The Natural Way of Things, and every mention feels a like a circling back rather than a new path). Would still recommend other writers seek this out.

The Rings of Saturn by W.G. Sebald (novel, e-book)

Broke my run of audiobooks because I knew the photographs would be a big part of this one. Another antidote to the Caldwell Turnbull's of the world of books.

Was interesting reading this after Proust a couple months earlier.

Finishing off the year with yet another apocalyptic book. This one is presented as a how to manual of sorts for a rebuilding society after a massive event that leaves fewer thank 10k people to repopulate the earth.

In fact, it you often forget this and it's just a really well-told basic primer on industrial chemistry and mechanics. I feel smarter having read it but no more prepared for, or excited about, being one of the survivors...

No Time To Die