How Do You Tell The Difference Between Pohutukawa and Rata? 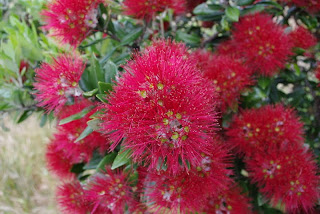 This is one of the questions that made me take action and start learning more about New Zealand natives. Everyone in Aotearoa knows what a pōhutukawa in full bloom looks like, and most have a faint, amorphous idea that rātā have a similar floral display. In the last month I have heard two people (one in the North Island, one in the South) proclaim "A lot of people mistake rātā for pōhutukawa", implying that some percentage of (late) December's red explosion was down to rātā. To figure out if this is true, we have to first establish the differences between the two trees.

They are often many-trunked, with rough, fissured bark. Red flowers in large spiky balls in early summer. The leaves are opposite (they grow in pairs), 5-10 cm long, with a dense covering of white hairs below.

And now, the larch.


Well, firstly you’ve got Northern versus Southern. The northern often starts life as a vine, and can grow taller (25m vs 15m) than the southern, which tolerates cooler temperatures. The flowers are red spiky balls in summer, but according to Dawson and Lucas they’re smaller than the pōhutukawa. The kicker, though, in terms of rātā versus pōhutukawa are the leaves. They tend to be a bit shorter, and the underside is light green and hair less.


Okay, sounds good. But what about when you can’t reach the leaves? I had this problem the other day when I walked into the bush on Tinakori Hill during my lunch hour. The path was steep, never came close to the trunks of the red flowering trees and in my work trousers I didn’t fancy getting too wild. I looked on the ground beneath a high red inflorescence but all the leaves were dead and brown.

On Kapiti Island, however, I saw a fine specimen of Northern Rātā dominating a gully and could truly appreciate the difference in its skeleton to a pōhutukawa. Then, a little further on, I found fallen flowers. Unlike pōhutukawa, which tends to shed the red needles separately, the many rātā flowers fell with stem and even a few leaves attached.

As I was walking along Houghton Bay Road last week, I happened across another tree, growing amidst a set of pōhutukawa. It had similar leaves, waxy green tops, with lighter, hairy undersides. Similar trunk and branch formations. But no red blossoms. Instead, there were dull grey-green balls about 2 cm in diametre.


When crushed open, they revealed sticky black seeds, like caviar but larger. This was not pōhutukawa, nor was it rātā. Back home, my books told me this was karo. In a couple of months time, when all three trees are back to green, they will sink back into obscurity. They will just be trees. Green with a brown skeleton. We will drive past without noticing. We will forget they are there. That's the secret of the appeal of these trees.

Timing, in nature as in comedy, is everything.

Email ThisBlogThis!Share to TwitterShare to FacebookShare to Pinterest
Labels: nature

Just to confuse the issue even further....! Now available in stores are pohutukawa/ rata hybrids. Apparently a pohutukawa style flower with rata like leaves. Mine has just finished flowering. Not as large and stately as near Tinakori Road (used to walk that way to and from work) but from little acorns....?

Thanks for that. The same issue drove me crazy since I came to NZ 2 years ago. Now finally I can identify the "Southern Rata" in front of my house. Leaves rule!

About twenty years ago, I met a scientist at Opoutere who excitedly shared with me his research suggesting there was no strong difference between the two, but that rather they and their various forms were examples of a kind of genetic drift. I assume this was in the early days of DNA testing

hi there - we are researching rata flowering (why does it flower so heavily in some years, and not at all in other years?) and I wondered if you could tell me when you took your photo of rata flowering at Tinakori Hill please?

That photo would have been taken January 2010.

Many thanks - this is really helpful. Best wishes, sarah