It’s no secret I’m on a mission to learn more about this fair country, the one I chose to return to. In January I documented my first forays into a deeper knowledge of New Zealand’s native flora and fauna. But I’m also interested in the history of this place.

The two are interlinked.

After I ventured into the bush on Tinakori Hill in search of pohutukawa and rata, I also looked up the history of the hill.

When walking around Island Bay, I noticed the spelling of Houghton Bay (“Haughton Bay”) on the band rotunda and did some digging to find out if this was a typo or the spelling has changed over time (this).

But some weeks I can walk around blissfully unaware of the questions I should be asking about this place I’m in.

I’ve discovered a tonic for such complacency: spending time at the Mt Victoria lookout.

On Saturday M. and I walked from Mt Albert (as in Queen Victoria’s hubby) along the Southern Walkway to Mt Vic (and back – oh yeah!). There was a lot of interesting stuff along the way like the back of the zoo ( we saw baboon, African hunting dogs and giraffe), Truby King Park (an interesting history in itself), and the mountain biking nationals on the slopes of Mt Vic. But in 10 minutes at the summit, I compiled a list of things I needed to learn more about, all by eavesdropping on other people’s conversations.

Some were clearly locals (or British subjects who now call Wellington home) who were showing visitors to our fair city the sights. They’d point to the Basin and say, ‘That’s where they play test cricket,’ then go into a long story about how the founding fathers (his term) of the city planned to carve a canal from the waterfront to the Basin (an actual sinkhole back in the day) along where Kent and Cambridge Terraces are now. I remember reading this somewhere, but seeing it from Mt Vic made it sink in for good.

There was also a real kiwi bloke who was, I suspect, running a mini-van tour. I listened to him explain how Miramar was an island, and up until 1855, it was only a sandbar that ran from it to the mainland. That what is now Kilbirnie, Rongotai, Evans and Lyall Bays has all been reclaimed in the last 150 years. I’m quoting this guide now, and haven’t looked into how correct his dates are. That’s on my to do list.

Aside: The other day I was listening to the radio on the way on from work and the two DJs had the most inane conversation about what the Japanese word Tsunami translates to in English, and whether there was a difference between a tsunami and a tidal wave. It would only have taken them 10 seconds to find on the internet, but they managed to generate a couple of minutes of “content” from their ignorance before I changed the station in frustration. I know that I risk doing the very thing that turned me off by talking about my own ignorance, but let me plead my case. The purpose of this blog post is not to generate content with the least amount of effort (a la the ignorant DJs) but to A) alert readers to ways in which they might awaken, reawaken, or heighten their interest in their own surroundings and B) track my own response to being back in New Zealand after five years (of and on) away.

There were also clusters of tourists without local friends or tour guides up the top of Mt Vic, and their conversations were often as compelling. They’d point at buildings or streets or islands in the harbour and lunge for a name, perhaps in the hope of triangulating their position. Most of the time I knew the names of the landmarks they discussed, but not always. What’s the name of that observatory up passed Brooklyn? Is it an observatory or a spybase? Wait, don’t tell me, I’d like to find out myself… 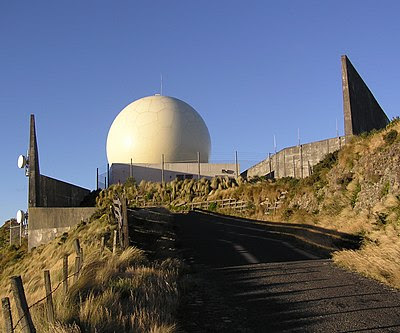 Ah, I mean the radar transmission station on Hawkin’s Hill. Sounds like I’ve got my weekend walk sorted.
at 9:26 PM