On this, the last day of 2010, I can’t think of a better book to have finished reading than Gifted by Patrick Evans.

For starters, it was last December that I paid a visit to Frank Sargeson’s house in Takapuna, which is the setting for much of the novel. Sadly, the army hut in which Janet Frame lived 1955-56 is no more and the portion of the back garden that housed it was sold off to pay for the upkeep of Sargeson’s house as a museum of sorts. Similarly, the macrocarpa hedge that is so large a symbol in the novel is less of a presence these days, but my time inside Frank’s fibrolite bach made reading the novel a very real, very navigable experience, the same as one might feel reading a novel set in Tuscany after renting a villa there. 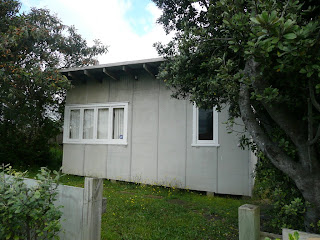 Perhaps more significant than the physical overlap between myself and the novel’s two protagonists, Sargeson and Frame, was the fact that these writers featured so prominently in my reading in 2010. I’d read Sargeson’s collected stories at high school (and with a high school student’s exam-focussed eye), but the mention of his early collection, A Man and His Wife, in a review of my own short story collection prompted a trip to the local library (as Sargeson does so frequently in Gifted). My reaction to A Man and His Wife features in my July reading summary.

2010 was also the year I read Owls Do Cry by Janet Frame, which is the novel (or as Frame refers to it in Gifted, ‘an exploration’) she wrote in a furious five months in the army hut. Owls Do Cry made it all the way to #2 on my best reads of 2010 list.

Reading Gifted for me was like standing at a river delta and watching the different coloured waters collide, moil and eventually mix. Evans’ novel is both a tremendous piece of imagination and scholarship (see the three page author’s note at the back of the book). I’m not sure, however, if the story ever elevated beyond, as Kate De Goldi calls it on the back cover blurb, a “re-imaginging of a signal moment in our cultural history”. The ontological clash between Sargeson and Frame that provides much of the fuel for the story was the least engaging part for me, perhaps because I found all of the stuff about mimesis in 100 level English papers terribly dry and unsexy.

But anyone with a passing interest in Sargeson or Frame will get a lot out of reading this novel, and I feel invigorated for another year of reading well and reading widely in 2011.
at 11:56 AM