Advice to Listeners
[Cynthia Ozick on Steven Millhauser’s ‘In The Reign of Harad IV’, here]

In addition to listening to a lot of The New Yorker Fiction Podcasts and reading 'Blue Collar White Collar No Collar' which I'm reviewing for The Listener (so you'll just have to wait till it's printed to see what I think), I recently finished King Soloman's Solomon's Mines by H. Rider Haggard, which I consumed as an audiobook.

I enjoyed it. For something written in the 1880s and set in Africa, it wasn't as bad with the racial stereotyping as I had expected. Especially it being what we know might consider genre fiction, though of course it was sui generis when it was published and spawned the whole Lost World genre.

1. 'Cavorting' by The Courteneers
2. 'Lewis' by Yo La Tengo
3. 'Your Love' by The Outfield [token song from slowly growing post-wedding boogie playlist]
4. 'Cruel to be Kind' by Nick Lowe
5. 'Back of the Van' by Ladyhawke
6. 'You're Everywhere' by The Tragically Hip
7. 'Mannequin' by Katy Perry [token thematic link to novel in progress; NB: this acoustic version is actually okay, the album version: not-so-much]
8. 'Tightrope' by Janelle Monae (feat. Big Boi)
9a) 'Authority Song' by John Mellencamp
9b) 'Authority Song' by Jimmy Eat World (not a cover of Mellencamp's song, but it is about it)
10 'What Goes On' by The Velvet Underground
11. 'I Will Follow You Into the Dark' by Death Cab For Cutie
12. 'Lowdown' by Wire
13. 'Overfloater' by Soundgarden
14. 'NW Apt.' by Band of Horses


Before King Solomon's Mines I listened to South by Ernest Shackleton which details his famous (failed) expedition to cross the Antarctic continent and the subsequent efforts to "self-rescue" as Bear Grylls and his Discovery Channel doppelgangers call it these days.  There's a lot of details in Shackleton's account, some of which is especially tedious in an audiobook format, but there's a compelling narrative there. And Shackleton is often quite funny. He clearly hated killer whales and had a soft spot for penguins (despite eating quite a few, including emperor penguins [poor Peka!] I remember correctly).

The Ever Opening Eye


Back in November 2010 I wrote about how flowering trees... "But flowers — big-ass flowers at that — growing on trees? It seemed like I had been missing something to this point in my life."

"The days of the kowhai bloom are already gone for another year and the cabbage trees will shake off their flowery ways soon enough. But I feel as if, in taking note of these process of nature around me, I have welcomed another set of companions to my life. Like an extended family, one or other will always step forward at significant times."

This past month my botanical revelation has been red hot pokers.  We had a clump at the base of a gum tree when we were growing up, and there must have been others around Palmy too. Back then, I never took note of what season it was when they flowered, or even from what sort of plant these red hot pokers (such an evocative name; when I started Googling this topic I wasn't even sure if this was a common term or just something my family had made up) came from.

Heck, this time last year these pokers didn't even register (there was a dearth of botanical blogging last winter...).

The revelation for me has been that in my neighbourhood there are in fact two very different types of plants producing very similar, red-hot-pokery flowers.

The first is the true red hot poker, Kniphofia uvaria, also known as the torch lily. This was the sort we had at my childhood home and around Palmerston North, though it is less common on Wellington's South Coast.

Aloe arborescens, also known as the Krantz Aloe (if wikipedia is to be believed), a close cousin of the more famous, but less-dramatically flowered Aloe vera.

The Aloe's pokers are a more conical than the Kniphofias, but the real difference comes lower down. As you can see from the photo on the right, the Aloe has thick, succulent leaves with sawtoothed edges, whereas the Kniphofia looks like more of a grass, or *makes sign of the cross and hisses* an agapanthus (booo!).

For those of you who are flummoxed whenever I get my botanical geek on, discoveries like this -- that there are actually two different plants producing very similar flowers -- are analogous to similar discoveries during childhood: that the sun stays up longer in summer than winter, that the moon controls the tides, that potatoes grow under the ground and tomatoes above it.  Pieces of knowledge you got along okay without knowing, but now that you know it, things make a lot more sense. So that's why potatoes and kumara and even onions are more alike than tomatoes and beans and peas (and why they might ready at different times of the year).  And more than that. Now that you have entered into this new knowledge, you are part of an exclusive club. Your little brother doesn't know about tides yet. Ha! What a sucker!

So, having figured out the difference between the two hot pokers in my neighbourhood, I am a little more worldly and I'm proceeding to bore acquaintances (and internet passersby) with this useless trivia.


I've now read three of the four regional winners of the Commonwealth Writers Prize Best Book category. I'd read The Thousand Autumns of Jacob de Zoet prior to Sydney, and on return I've read Room by Emma Donoghue and That Deadman Dance by Kim Scott.

Room is a simple read, by virtue of its five year old narrator who is being raised by his captive mother in a tiny  garden shed. The story verges on harrowing, but I was often distracted by issues of the voice (moments when the author shows through the muslin veil of Jack the narrator in order to push home a point or drop in important details.  It's definitely a good book; it just may have suffered in comparison with Kim Scott's The Deadman Dance, which won the 2011 Miles Franklin Award this week as well.  Scott's book is rich and poetic. It centres on the interaction between Europeans and the indigenous Nungar people on Australia's west coast in the early 1800s - a facinating time and place. The issues are at once handled with a light hand (there are lots of gaps and sudden shifts due to the short chapters, themselves made up of fragments of narrative) while also laying on the message thick at the level of language. It's a delectable read.

I knew it had to happen. There was no way the emperor penguin that appeared on Peka Peka Beach on Monday could hang around without getting named.  Sadly, my suggestion of Peka was beaten to the punch by Chris Wilton, who first spotted it and chose the moniker Happy Feet.

Note: Happy Feet was the name of the movie, the main character was called Mumble.  I didn't want to air my sour grapes about my perfectly alliterated, historically consistent, New Zealand-sounding name being ignored in favour of a nonsensical nod to corporate America... so, um, yeah.

Anywho... I just wanted to say that I think the decision making thus far by DOC and the other players has been correct. At first they were hands off. No one knew what was going to happen (and clearly neither did Peka, I mean Hap-- no, I mean Peka). He looked happy and healthy on Tuesday, but clearly the whole sand is not ice thing led the wee man down a path when human compassion led to human intervention.

As of yesterday, it looked like Peka had the option of a birth aboard a Russia icebreaker headed for the great southern land in February, if he pulls through from the operations to clear out the sand in his system.  Here's hoping he recovers and we humans continue to make the best, most considered and compassionate decisions for the metre high adventurer. 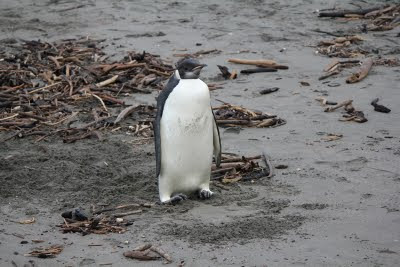 On the red hot pokers: I looked at your pictures and said to myself, "Well of course they're different." Then an hour or so later caught myself driving complacently past what I thought were red hot pokers only to realise, suddenly, that they were the OTHER: the aloe. Nothing in life is as simple as it seems.

Love your play-lists (keeps an old girl up to date and takes her back) and of course 'The Aloe' KM knew about them too.

Surely they were Solomon's mines, not Soloman's.

One of the downsides of audiobooks is you continue to misspell characters' names and titles of books until someone points our your mistake.