Babel Building Blocks
The writer Isaac Babel is said to have asked women he met if he might rifle through their purses to inspect their contents. Some accounts have him paying for this privilege, fewer still suggest that he paid prostitutes for this (and this alone).


_
"A well-thought-out story doesn’t need to resemble real life. Life itself tries with all its might to resemble a well-crafted story."
— Isaac Babel ('My First Fee')


_
“How late I learned the essential things in life! In my childhood, nailed to the Gemara, I led the life of a sage, and it was only later, when I was older, that I began to climb trees”
— Isaac Babel


_
"I grew up wishing that someday, somewhere, a door would open and my father would come in. We would recognize each other immediately, and without seeming surprised, without letting him catch his breath, I would say: "Well, here you are at last. We've been puzzled about you for so long; although you left behind much love and devotion, you bequeathed to us very few facts. It's so good to have you here. Do sit down and tell us what happened."
— Nathalie Babel (Isaac's daughter, quoted here) 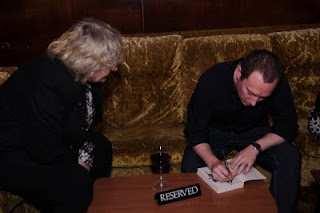 Today marks one year since the book launch for A Man Melting (and one year and one day since getting engaged; still a few months to go before November!!).  The book was officially released on 2 July 2010...
I'm working like stink to get a book together that might be able to come out in the second half of 2012, but there are a lot of things outta my control (and even the things that are in my control I might not be able to manage), so for now it'll do to look back on my first launch and the solid twelve months me and A Man Melting have had, including: 10 positive reviews (0 negative), 2 end-of-year best book lists, 1 "hot writer" appellation, 1 "best dressed", 3 appearances on radio NZ, two appearances on TV, a prize, a number of newspaper articles about me, 21 columns published in the Dom Post, 1 travel article published and 1 fiction review submitted and set to appear shortly.
*
And 1
And it's nice (in a strange way) to have my words being picked up and mangled by spammers. Here's the latest:
"She was only a newcomer (her solo moody was 4 years later) and described herself as 'a pouch of potatoes'"
- misquoted here, original here.
*
The word and the image


a little thing, made big from not knowing when to leave off:
gone past all need except need, enough never enough. 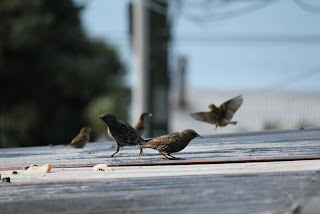 I only started noticing starlings after reading Tim Upperton's poem, 'The Starlings', two years ago. Until then, I guess I didn't bother to distinguish them from blackbirds and thrushes, despite the fact this now seems ludicrous: the metallic glints of their feathers, their electro-squeals, the packs picking through seaweed or muscling out sparrow and chaffinch on the freshly sown lawn, even their silhouette (short tail, thin beak) - how could it be anything but a starling?

The pursuit of knowledge is like the starlings' drive to reproduce in Upperton's poem: never-ending and perhaps even pointless. But once you start, it's harder to derail a certain fascination.

It wasn't until this year that I took note of the difference between a summer starling and a winter starling. And it's all thanks to my new Canon 550D and its image stabilised 55-250mm lens which allows me to get close-ups of birds and capture them in motion while still keeping the images clear. Before this starts sounding like an infomercial... it's time for pictorial illustration.

Because I only got my camera a couple of months ago, I don't have any summer starling photos, but here's a nice illustration courtesy of http://www.g1art.com:

In winter, a starling's plumage gets all spotty and they look a lot more sinister, to me at least. I think the sinisterness (?) is directly proportional to the starling's immediate environs...

Okay, I know I've already lost most of you, but does anyone else think a starling in winter looks like a dalek?

I like you're old stuff better than your knew stuff

When I lived in the UK I really enjoyed watching Masterchef, which was a 30 minute show every weeknight which pitch 6 amateur chefs against each other. Every episode there were 3 challenges and one person left standing at the end of the episode. Then it was quarterfinals, semis and a week long final where the final few went of the the jungle or something.

Now of course every country has their bastardised Masterchef - none of which I can stomach. The Australian one, which runs before the TV1 news here in NZ (so I am destined to catch the last 2mins of every episode) is the worst. At the moment they are working their way through the top 50, kicking out people every two challenges. On average it seems to take 1.5 episodes to finish one challenge (and these are 60 minute episodes). And the challenges seem to mostly be them all cooking the same freaking dish! No thank you.

So I was delighted to see this video on YouTube (via Twitter) today that took me back to the good old days old Greg and John on the original Masterchef:

The NBA has officially locked out its players as negotiations for a new collective bargaining agreement with the players union have stalled. NBA.com has also gone into lock down mode.  It's looking like some or all of the 2011-12 NBA season will be lost. The last time a labour dispute affected a season was back in 1999, when they managed to come to an agreement in December and held a 50 game regular season (as opposed to the standard 82).

The maths is simple for most: a full season > a partial seasons > no season at all. Sadly, most might not include the owners (several of whom are losing money, so no season means less loss) and some of the players. But sucks for the fans.

It especially sucks for Sacramento Kings fans (like me), after the Californian capital managed to keep its franchise for one more season, but needs to increase attendance and get a deal for a new arena done in order to insure the long term viability of an NBA team in Sacto.  Add to this the fact that in the last week the team has acquired three new potential starters: Jimmer Fredette (#10 pick in the 2011 draft and the latest great white hope), John Salmons (via a trade with the Milwaukee Bucks) and JJ Hickson (via a trade with the Cleveland Cavs). And the Kings probably aren't done revamping their roster. Whenever the lockout ends and free agent signings can commence, they should be targetting another big man from Nene, Tyson Chandler, Marc Gasol, or resigning Samuel Dalembert.

I was talking to a friend the other day who said he just can't get into basketball because to him the game seems relatively static and repetitive. I can totally see this, but once you buy in to the narrative of American sports (in which statistics and economics play major parts) it's difficult to disentangle oneself. There's always some drama going on, most of it off the court, or between possessions.  The loss of an entire season does toss a wrench or two into the machine (how will the draft order be determined if no season took place? what happens to players in the final year of their contract who don't get a chance to play their butts off in 2011-12 to earn their big payday?) but it also threatens to break that narrative thread. The NBA could lose a lot of fans in the next 12 months as people find new time sponges.  I know I'll certainly notice the extra 2.5 hours 3 times a week that'll free up with no Kings games to watch on NBA league pass.  Will it make me more prolific? Meh, I'll probably just play angry birds.


But, while there's still some Kings news to report, I'll just wish Omri Casspi well with the Cavs. If only you were as devastating in purple as advertised!!
at 4:45 PM

Come shoot some hoops after work

That poem. Did you know 'starling' is a diminutive (of the Old English 'staer')?
Cheers,
Tim

I once wrote a poem called "Onions".

Have you read Vincent O'Sullivan's great poem about having sex while peeling an onion?