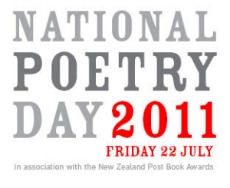 Today is National Poetry Day in Aotearoa / New Zealand. There are plenty of events on in towns around the country, but for those of you looking for an instant fix, here's a poem from me:

He flexed on film for Thomas Edison
And wrote books with Conan Doyle
But it is in photographs,
Of which there are plenty,
That the shadow of Sandow is closest to
The man who willed himself into marble.

Take this one, from the Chicago World’s Fair.
See him dusted with chalk, posing in a box
Lined with a coffin’s black velvet,
Emulating Hercules or David or Samson
(the caption doesn’t say),
In a cheetah print loin cloth.
How much like death these photos.
How much like myth
Or like perfection.

And like all myths, all deaths,
All flashes of perfection,
One cannot stare too long
the grain emerges
the backdrop sags
the moustache irks.
So let us flick through quickly
Then pull the shade on Eugen Sandow.
Give the marble god a chance to blink.


---
You can see Sandow posing on Edison's Kinescope strip from 1894 here.

I wrote the first (much longer) draft of this poem back in 2008 when I was working on a series of poems based on Vaudeville and freak show entertainers from the late nineteenth / early Twentieth Century. In researching Sandow, I learnt he toured New Zealand for six weeks in 1902-03. The man was a sensation long before the days of YouTube and his visit was built up to such an extent that one woman in Wellington was famously overhead proclaiming: "Why, he's just a man!"

An early section of the novel I'm currently working focusses on the arrival of Harry Rickards' Vaudeville Company (also known as the Number 3 Company), of which Sandow was the headliner, to a small South Island town.
at 1:01 AM

Email ThisBlogThis!Share to TwitterShare to FacebookShare to Pinterest
Labels: poetry, sandow, the novel