I read/listened to 6 and a bit books for fun this month and read more than that for an essay, but let's start with music because I got a few things to say and you should hit play above while I prattle on. 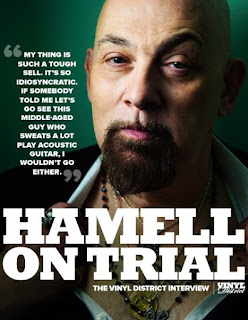 Hamell on Trial – A new discovery. He reminds me of Dave Wyndorf without the leather and the space rock and the comic books. It’s legitimate to ask what’s left of Wyndorf without those things… well, it’s Hamell on Trial. It helps that they are both about 60 and have the same, goateed, cat-eyed, plastic-surgery-but-not face, and seem to have self-confidence that belies their level of success. But it’s the world that wrong in both cases. Check out Ed Hamell and thank me later.

(A week ago the award for 'old dude who I didn’t know existed but then I listened to lots this month' would have gone to Willy Nile. Commiserations Willy.)

The Eurythmics – Turns out Lennox/Stewart worked their way into my DNA as a kid and rewrote some of my genetic code. I challenge anyone between the ages of 29 and 36 to listen to their greatest hits now and not conclude this is the greatest music you used to hate. Unless you never hated them, in which case, you were a genius and I hope you still are.

(NB: This only applies to songs that were played on the radio back in the day. Anything that was new to me left me feeling NUTHIN'! Nostalgia, huh?)

Ryan Adams – Spoiler alert: I’m going to combine Prisoner and Prisoner B Sides as one album for my end of year list of the best music. I’ve never been a huge Ryan Adams guy, but something clicked for me with Prisoner and I love a lot of its supposed B sides. Is this the rare case that a double album might've been justified? Nah. The way these tracks were released was perfect.

Earworm of the month - 'Cumberland Gap' by David Rawlings (with a lotta help from Gillian Welch). I don't mind that it sounds A LOT like CSNY's 'Ohio', or it's one of about 1,000 songs called 'Cumberland Gap'. It's catchy as all get out.

BOOKS (in order of consumption)

Nothing but blue skies by Thomas McGuane (novel, audiobook)

An out of control novel about an out of control middle-aged dude in Montana. I enjoyed many aspects (its humour, its engagement with Clinton-era contemporary matters, the language), but it never quite hung together to be totally satisfying. I don't want to be that guy, but maybe I just like McGuane's short stories better.

My Name is Lucy Barton by Elizabeth Strout (novel, audiobook)

Cool control, that’s how I’d describe Strout’s style. This doesn’t pack the punch of Olive Kitteridge (or even attempt that book’s scope), but it still has teeth. I’ve got Anything is Possible, Strout’s latest queued up as my next read, so I might write more about this one with reference to that.

I really enjoyed How to be a woman, which was one of my top ten reads in 2012, the year I became the father of a little girl and future woman. Moranifesto has that same verbal vim and the ability to wed the personal and the political in relatable ways. And the audiobook, read by Joanna Neary, is a joy – Neary walks that tightrope between a Moran-impersonation and standard narrator voice, making it feel less like reading a book than having a slightly tipsy female friend hold forth on whatever’s grinding her gears most this minute.

Because it is, despite the political sounding title and politically focused preface, essentially a collection of columns, it feels disjointed and makes some of the entertainment pieces feel lighter than they might otherwise.

And on the politics, Moran’s pitch is essentially the same as Thomas L. Friedman’s in Thank you for being late: the internet and related technologies provides humanity the ability to get the best out of everyone, if used wisely. Whereas Friedman goes and talks to CEOs of tech companies in Silicon Valley and the Middle East, Moran is a bit more scattershot and dare I say it superficial, but better company and no less compelling.

Hey, this was good. I almost said 'fun'. And it was fun in parts. But it puts its two main characters (the titular animators) through the works. There were elements I wasn’t fussed about, and it’d be a dick move to say, ‘great, for a first novel’, and go and list the structural whiffs and tropes I’ve seen before, but I can be a dick sometimes. Totally. But not today.


Because I’d recommend this book to most anybody. Whittaker not only gives us two memorable protagonists and embeds the creation of not one but two feature length animated films within the text, but totally gets inside the process of creating something other than a novel and the way an animator might see the world.

This was hard to classify as it’s only available on Audible, where I get my audiobooks from when I’m not borrowing them from various apps associated with my local library, but it’s more of a podcast than a book. 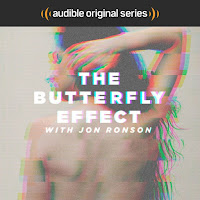 Anyway, anything that wades into this space will be problematic in some ways, but it was really interesting and I’d recommend it to anyone. 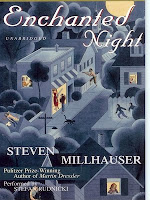 Pet hate: audiobooks with music tracks. This one featured annoying incidental music at certain points (including the first, like, 10 minutes) as well as a second narrator for one specific character (but not other female first person chapters) and a babbling vocal chorus are various points which, though indicated in the text, just felt hammy.

This novella resembled the bitsy longer stories in Millhousers short fiction colelctions that I tend to like less than his more unified stories (indeed, I often begin to skim these longer ones).

I was interested to come across the sections here told from the perspective of a mannequin, who is both a mannequin and alive/enchanted.

There’s definitely a lot Millhouser and I share in common in terms of what interests us, what gets out fiction juices flowing, but in terms of how this book was constructed (and produced as an audio programme) meant I couldn’t enjoy it.

I normally wouldn’t write about something I was only a sixth of the way into, but when an audiobook is 36 hours long, there’s actually plenty to be said that far in. I was skeptical about the single life with four branching paths as described in the novel’s blurb, and wasn’t sure about committing one and a half days to such an endeavor. For some reason I imagined each scenario being told in its entirety before the next one started back at Fergusson’s birth. The actual structure is far more preferable: Chapter 1.0 covers everything up to Fergusson’s birth, 1.1 has Fergusson’s earliest memories, 1.2 overlaps slightly with 1.1 – enough to show there are some differences – but moves the story/chronology forward, 1.3 overlaps/contrasts with 1.2 before moving forward, and so on.

There are very few ‘scenes’, as in something with dialogue or detailed desciptions of setting, characters appearances etc. Instead, there’s a lot of story-telling. And it’s intoxicating. At least, the first six hours have been…

Short story collections. A lot of short story collections. I read/reread books by Alice Tawhai, Lawrence Patchett, Nic Low, Sarah Quigley, Amy Head, Breton Dukes, Tracey Slaughter Helen Waaka, Pip Adam, Bill Manhire… and I also read parts of Steven Millhauser’s Voices in the Night and Lydia Millet’s Love in Infant Monkeys whenever I wanted a non-Kiwi palate cleanser. This was all to inform my essay on ‘The Moves in Contemporary NZ Short Stories’, which I’m presenting on Saturday in Invercargill at the Dan Davin Short Story Conference (full programme here). I ended up taken a different path with the essay (one closer, in some ways, to the work I did with Recurrent Neural Networks earlier this year).

Game of Thrones season 7 (& the Ringer’s Talk The Thrones after every episode) – I haven’t read GRRM’s books (well, I read the first 50 pages of the first book on a flight once, then the person whose book I borrowed woke up) and I like the way the presenters on Talk the Thrones are split 2/2 in terms of readers/Maesters and non-readers. This season was disappointing, in terms of what it could have been, but it was still appointment TV/streaming via Neon when the kids are in bed. The big question is: will I read the books in the 2 years between now and the final season?

Little Big Lies (season 1) – No. The great Michael Kiwanuka song in the intro and the murder-mystery / chorus of bitchy side characters in episode one hooked me in. But what followed was five episodes of the same kinds of scenes being rolled out again and again (hmm, here comes Perry, I wonder if he’ll hurt Celeste or not… oh, there he goes). And the teen daughter planning to auction off her virginity for a good cause – I’m sure I’ve seen that before. And then it got wrapped up in the seventh and final episode with the least surprising answer to who died and who dunnit. Pfft, yawn and argh.
L’Avventura – A classic Italian film about two characters trying to track down a third. How could I not watch this given the book I’m working on? This is the kind of film my fictional filmmaker would feel embarrassed to say he didn’t like / left him feeling bupkis, but I am not that filmmaker. I totally get how it broke with tradition and sought to do something different with film – that doesn’t have to mean it was successful in making me feel what Antonioni intended the audience to feel. But 57 years is a long gap to bridge, I guess. My bad.

My kids are into the Smurfs at the moment thanks to some petrol store promotion, but they like the recent films (Smurfs 1 and 2) and not the animated series of my youth. Heathens!
at 10:51 AM