May Consumption Diary (with extras)

I got a bit of media coverage after a session I ran for the Otago Energy Research Centre, which was followed by this piece by Uni comms about me and my writing background and how it links in with being their Net Carbon Zero Programme Manager.

Work is equal parts fun and daunting at the moment. Every week brings new connections, which bring new opportunities and obligations. Right now it feels like things might start to settle down about 2024 or 2025... 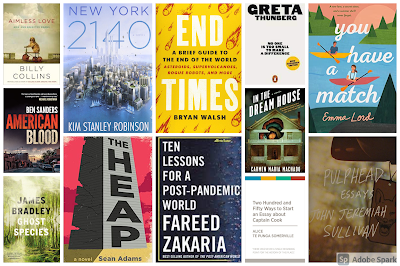 Published in 2011, collecting magazine pieces from even earlier, but it didn't feel dated. Sullivan was tapping into the racial, religious and economic discontent that would propel Trump into the White House - that's part of it. But his voice is so clear, distinct. I really want to read a collection of his essays from the last 10 years...

You Have a Match by Emma Lord (novel, audiobook)

YA high school drama and romance... A couple of years ago I would have turned my nose up at such a thing. But I really enjoyed it and Lord is excellent at pushing a plot forward with the right amount of challenge and comfort. Highly rated.

A different kind of bloated. I couldn't help comparing this unfavourably with Neal Stephenson's Seveneves. Like, kudos for the melding of imagination and scholarship, but then again: that's all you managed to say in so many pages?

Maybe I was grumpy because it seemed to accept so blithely 100 years of piss-poor climate action from our present to the present of the novel.

Maybe it was because the characters all seemed to be experts in (American) history 1970-2020, which would be like me or you knowing all about the gunfight at the OK Corral, the economics of the dustbowl or the early days of photography (without Wikipedia!).

Listening to Collins read these selected poems made me wish I was listening to Hera Lindsay Bird instead. Or Mark Leidner. Or anyone with a pulse and a sense of humour (dad jokes don't count).

Maybe I was still grumpy from like, three books ago, but this seemed undercooked.

I thought this was going to be Notes from an Apocalypse, but it wasn't. It read like a run of Time Magazine cover articles, the annoying uncle of dinosaur media that delights in telling you about the Drake equation, Moore's Law and R values as if you didn't know about that shit already.

And yeah, I was super pissed off by Mr Walsh's chapter on climate change, which a) is downplayed as an existential risk and b) he reckons the only answer is geo-engineering... without sufficiently considering the risks (when it made messing with nature ever go wrong??) and the inequitable distribution of those risks.

But his chapter on pandemics, written before COVID-19, is pretty fucking prescient, down to the risk Trump would pose if something like H5N1 or H1N1 ever kicked off while he was in the White House.

No one is too small to make a difference by Greta Thurnberg (non-fiction, audiobook)

The Liver Cleansing Diet to Walsh's three cheese lasagna. Basically Ms Thurnberg reading a bunch of her speeches, with a bunch of repetition. But rather than grate, her taglines hit like sitcom catch phrases. Oh no she didn't!

Hey, this was quite good. Except for the fact it could probably have been written pre-COVID. And can I remember any specifics from it? Hold on, I'm sure I can... I mean, beyond the fact it didn't make me want to shove a Phillips head in my ear, and I felt kind of worthy listening to it...

In the Dream House by Carmen Maria Machado (non-fiction, audiobook)

For a more successful way to use the constantly restarting/reframing technique, see:

Oh, and we managed to buy a house in Dunedin this month. We put unsuccessful offers on three houses and attended an auction for another where the bidding went mad early so I never technically got to bid/offer, but still had to go through the rigmarole of having finance and insurance sorted just to sit in a room and watch a woman burst into tears when a property investor kept out-bidding her and her husband...

So when you win a tender, you're like: Oops. Should I have offered that much? Did I just leave someone else in tears?

At least we're going to use it as our family home. We'll make memories and compost and cider there. There's a park across the road with the biggest pear tree I've ever seen, so I guess that'll be pear cider. I might even write a book or two. One of them will probably be about how problematic golf is. All that private land parading as public utility green space. All that water. The selfishness of the sport itself. But, o, the glory of it. The simplicity...

Which may just be a self-deceiving scheme to let me play a round or three at the local courses here...

The Masked Singer NZ - the kids are weirdly obsessed, even though they don't know who the celebs are

The Trip to Greece