I started writing a short story yesterday. I took my laptop to a different building at lunchtime and wrote for 30 minutes surrounded by studying students. It felt good.

Now I woke up at 6am on a Saturday to continue working on it, but instead I'm doing this consumption diary. 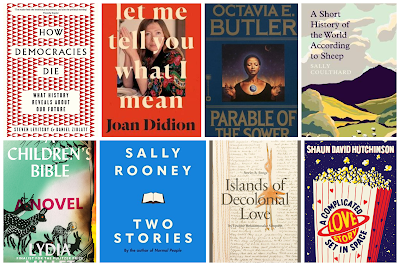 A Short History of the World According to Sheep by Sally Coulthard (non-fiction, audiobook)

I view these topic-specific history books are as a kind of palatte cleanser between books. A way to reset and may learn a thing or two in the process, or see things in a different way. This was okay in that respect. The second half is very Anglocentric. Oh well.

Written during the first half of Trump's first term, when the spectre of a second was very real (as was impeachment or implosion before the election). Pretty spot on in it's diagnosis of the authoritarian traits of Trump and a reminder, as Biden pushes through some pretty good policies on things like climate change, that we are no longer on the darkest timeline.

Should I count this as a while book? Probably not. But I have a 20+ hour Kim Stanley Robinson novel queued up for next month so I will, so there.

The first story was so good. The second less arresting. Hard to judge without another six or so stories to bounce off.

I will always love Millet for the jolt her novel Oh! Pure and Radiant Heart gave me when I was letting my dream of writing seriously slip away as a twenty-something living in soulless Brisbane.

A Children's Bible takes just as bold risks, but is completely different. It'd be interesting to read this after Parable of the Sower, rather than before. I think I would have enjoyed this take on climate-induced partial apocalypse even more.

Let Me Tell You What I Mean by Joan Didion (essays, audiobook)

A collection of previously uncollected essays, reviews and columns from across 5 decades of Didion's writing. Didn't feel bitsy. I enjoyed it.

Wow. This book is exciting. It starts out with short stories in a recognisable, North American mold. It felt a little like a first nation's Jesus' Son - and then the stories lean more into Nishnaabeg modes and language. Another bad comparison: it felt like the bait and switch in David Vann's Legend of a Suicide where the death (the dyer?) in the second half is unexpected and makes you re-evaluate everything. This time, it's like: where those first stories good on their own terms or were they bait to lure me in.

Lots to mull over. Lots to learn from.

YA romance notable for two things:

1. How absolutely unremarkable  it is within the world of the novel that the romance is between two male sixteen year olds. Literally unremarkable: no one bats an eyelid that person A is gay, or person B is gay, or that A and B would be a couple. It's cheering that there's these representations out there and that LGBT youths might experience total acceptance from the get go - in some spheres / at some point in the future.

2. How badly this thing falls apart in the second half. It felt a bit like taking the set up from an early season of the Simpsons and resolving it with in the many of recent seasons (or Rick and Morty).

Parable of the Sower by Octavia E. Butler (novel, audiobook)

If this is Science Fiction or Fantasy, then they need to build a bigger church, because a bunch of stuff written by dudes that manages to avoid the SFF label definitely deserves it. From the The Road to anything by Michael Crichton, and even Lawrence Wright's The End of October.

But who cares for labels, anyway?

I really enjoyed Parable of the Sower and am looking forward to reading the follow-up, Parable of the Talents. I did feel frequently wrong-footed by where I thought the novel would go and where it went. Again, approaching this from an SFF perspective is partly to blame.

And it's hella prophetic. See: How Democracies Die, et al.

I want to appreciate the great work of Dr USELU, i have been diagnosed of HIV virus for 3 years, i have lose all hope that there is a cure and i have been taking medicine to sustain myself not until i got to know about Dr USELU, i contacted him and he sent me his herbal medicine which i took as prescribed by him for some days and i went to the hospital after finishing the herbal medicine. To my greatest surprise i was confirmed HIV Negative after years of being positive, it is indeed a miracle.You can contact him for help. he can also cure the following (1) BRAIN TUMOR (2) LUPUS (3) CANCER (4) HSV-1 (5) HPV (6) HERPES (7) PAD (8) DIABETES etc. his whatsapp number +2347052898482 email: dr.uselucaregiver@gmail.com is website: https://druseluherbalhome.simdif.com/

Good news!!! Good news!!!
HAIL LIGHT!
Do you want to Be WEALTHY AND POWERFUL IN LIFE? Do you want to get Rich in a little time?Do you want the world to recognize you and listen to you when you speak? do you want to be in power and control? if yes, Be a part of the world most Capable brotherhood of Wealth and Power - The Illuminati Freemason-
If You Have Sickness or Affliction Of Any Kind Or Any Level, no matter how severe it is, Contact Us today for your liberation to health And Wholeness
ELEVATE YOURSELF FROM POVERTY AND FREE YOURSELF FROM THE BONDAGE OF SICKNESS WITH SPIRITUAL ATTACKS
Do not hesitate to contact us If We'll Be Of Help To YOU in any ways or at any situation you find yourself.
Here's our contact info
EMAIL/hangout: illuminatiinitiationtemplewa@gmail.com (Supreme Agent Of Light)
DIRECT SMS/WhatsApp / Calls To Masonic Registry +1(760)8922577

WARNING: only those who are interested to become a member of the church of Satan are allow to visit office or send a mail to the email address below. Do not contact if you are not interested and once you contact there is no going back. so think before contacting. BEWARE!!!

BE SURE THAT YOUR HEART DESIRES WILL COME THROUGH BECAUSE THAT IS WHAT WE ARE HERE FOR, making your dreams and wish come to REALITY.
HAIL LIGHT!

It is a well-known fact that Illuminati consist of Multi Millionaires,Billionaires who have major influence regarding most global affairs,including the planning of a New World Order. Many world leaders,Presidents, Prime Ministers, royalty and senior executives of major Fortune 500 companies are members of Illuminati in the USA. join a secret cabal of mysterious forces and become rich with boundless measures of wealth in your company or any given business, the great Illuminati can make everything possible and dreams come true