Islands in this dream 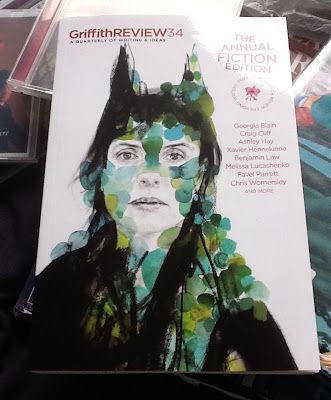 A thick package containing two copies of Griffith REVIEW 34 (the annual fiction issue, the theme of which is 'Islands') arrived yesterday. My story, 'Offshore Service', leads off the issue, which also features Favel Parrett, who I saw talk about surfing and fiction at the Melbourne Writers Festival last month, and Amy Espeseth, who I shared a jug of Pimms with one evening during the festival, as well as a bunch of other Aussie writers who I haven't seen in person but I'm sure are lovely...

I'm stoked to be in this issue for a number of reasons. Firstly, Griffith REVIEW is, in my view, the most consistently engaging of the Australian literary journals. Secondly, it's always nice to have a little coverage in Australia... I had two stories published in Etchings a few years ago, and my story 'Touch' from A Man Melting is supposed to appear in Sydney's HarbourView at some stage, but I've always felt that the line in my bio about having fiction published in New Zealand and Australia was cheating slightly. Not now!

And it's always nice to be paid for a short story in Australian dollars.

But I must damp down these feelings of Trans-Tasman Brother-and-Sisterhood for the footie on the weekend! Here's hoping my fellow Manawatuvian Aaron Cruden has a flyer.

At the risk of sounding like a Michigan steel worker (are there any primary or secondary industries still going in Michigan?): Bob Seger is awesome.

No, not his hair. Or his backing singers, which seem to up the schmaltz-quotient both live and in the studio. But when you get past these trifles... woh!

I got his greatest hits CD out from the library yesterday and it's funny how many songs I knew and were suddenly great when listening to them on a CD rather than hearing them on 2ZA or Solid Gold, or whatever radio station plays Bob Seger these days.

'Night Moves'. 'Still The Same'. 'Against The Wind'. Three of the greatest songs ever written right there.

Plus there's 'Hollywood Nights', 'Mainstreet', 'We've Got Tonight' and 'Turn The Page' (which Metallica rocked-up and, though I'm not a big Metallica fan, I have to concede is probably a notch better than the original...). Oh, and the second most popular jukebox song of all time: 'Old Time Rock & Roll' (a bit too obvious for my tastes, but it does what it sets out to do).

I see what's going to happen now. I'll go and search out Seger's studio albums and litter blog posts with Seger YouTube clips for the next six months.

Where will he sit on the podium of American singer-songwriters when this honeymoon period of discovery/rediscovery is over? He won't topple Warren Zevon, surely (I also borrowed Insides out by Zevon's son, Jordan... one day I might write something about the children of artists and how we respond to their works...). Will I realise how uncool it is to proclaim my love for a middle of the road seventies mid-Western rocker and issue a retraction? Nah, I'm beyond caring if other people like what I like, or trying to have a cohesive record collection iTunes library.

I wrote a column a few months back about travel envy. This morning I picked my brother and his friend up from the airport after their three week jaunt in China. They were tired and smelly and had a load of washing that had been rained on on their last day in Beijing that they needed to get out of their packs and re-wash.

It was nice to sit on the couch as they sorted out their gear, did some final accounting about who paid for what and who owed whom, and began to sort through the masses of photos they'd taken to ensure they both had copies (and they can subject me to a slideshow later).

Staying home has it's advantages.

If M. and I end up buying a house I might have to re-read this post often to soothe my itchy feet...