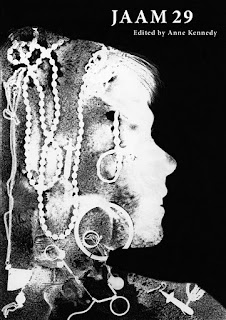 My copy of JAAM 29, edited by Anne Kennedy, arrived today. It features my short story 'The Bartender's Glass.' It's the detective story I mention sometimes when I talk about the stories I liked but couldn't find a way to include in A Man Melting as they didn't 'play nice' with the other stories...

Anyway, JAAM 29 looks like it has some great stuff inside and I look forward to reading it properly over the next week.

You can now read online the Book Group Compass piece on A Man Melting that featured in the Winter 2011 issue of Booknotes.

New item for to-do list inspired by a tweet on Sunday: write the great rugby league novel before Pip Adam does.

You learn something every day

The Niagara Falls did not look like this when I visited in 2009. In fact, it looked like the banner at the top of this page (it’s a photo of the horseshoe falls, taken near the gift shop on the Canadian side).

I went to the Argentina vs Georgia Rugby World Cup 2011 game in Palmerston North on Sunday. My one and only RWC game I’ll go to. (Mostly went up to Palmy to visit whanau and check out the Argentinean asado, but the barbeque wasn’t ready when we had to leave the square).

Great atmosphere in FMG stadium and the Square beforehand.

The Argentinean supporters got quiet in the first half when their team kept knocking on and missing their penalty kicks (Georgia led 7-5 at half time), but Los Pumas picked it up in the second. Phew!

Top 10 CDs I borrowed from Brisbane City Library in 2005

Clearly my musical education was a work in progress in 2005.

There might have been a review of A Man Melting in the Taranaki Daily News on November 8, 2010. Yep, that’s almost a year ago, but I just got a Google alert about it now. Sadly, the site it links to doesn’t work. Did anyone read this review when it came out? Do I need to go for a road trip to the New Plymouth library, or is there some other way to get a hold of a copy?

What the Dickens? II