There will be blood

Tonight is the launch of Lawrence Patchett's short story collection, I got his blood on me. (6pm at Unity Books, Wellington, if you wanted to pop along.)

I've just finished the book: it's bloody, ballsy, smart, experimental, reassured. I will post an interview with Lawrence (like these ones: Tina Makereti, Pip Adam, Sue Orr, Anna Taylor, Breton Dukes) in due course.

Until then, here's a listening suggestion for when you read the book:

I don't like to use flash photography on wildlife. I don't know if there's any evidence that it does them any harm (probably depends on the creature), but it seems wrong.

Sometimes, however, I have my camera on the wrong setting and I'll flash an unsuspecting bird. This happened the other day at Karori sanctuary. My camera was set to 'macro' (which is next to 'action', my default bird-snapping setting since they move so frequently and so swiftly) and it flashed, though I didn't notice the first time, so I took another. 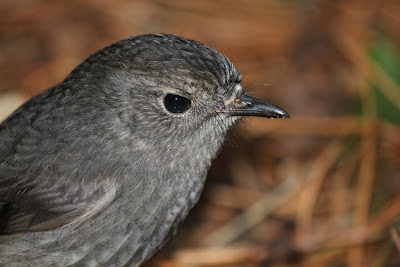 When I looked at the second photo, I noticed how great the colours were and how crisp the robin looked, then I twigged. 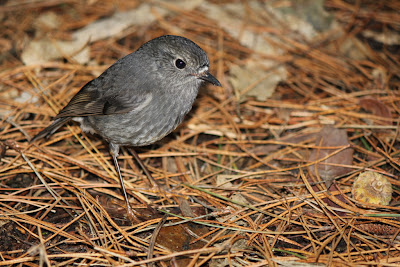 Sadly the non-flash photos didn't turn out at all. To further muddy my moral waters, the robin didn't seem blinded, offended or put-off by the flashes, even coming closer to me. I know it was just after the grubs my footsteps were rustling up, but it seemed more than willing to put up with the paparazzi treatment to get a feed.

I like taking photos of birds because a) I like being in the bush (even when it's a gated sanctuary) a) I like observing birds c) I like the challenge of capturing birds on film jpeg, which is a mostly down to good luck rather than technique. But I don't want the drive to take better photos to crowd out the birds and the bush.

Even if the bird doesn't care about the flash, I do. I think.


Out there / Oh dear


My coterie of trusted readers currently have 70,000 words of THE NOVEL to gnash, pooh-pooh and dismantle as they please. All comments and criticism will be received with open ears on 24 June.

I still have several chapters to write to finish the beast off. (As you might surmise, I'm a bit distracted today, blogging about nothing-much and all). But it's getting there, despite this latest wade through the slough of despond. Sample thoughts: It just feels like a pile of words. People will think it's for children. I can't write for tuppence. Why is Part Three so fricken loooong? Two years for this? Etc.

But, as we sang at end of year assemblies in high school: Nihil bone sine labore.
at 12:08 PM