Earlier this week I covered the best albums released in 2018. Now it's time to cover individual tracks, noting that any artist that made it into my top ten albums of 2018 is ineligible here.

This is a tricky one. In previous years there's been a catchy, less-than-cerebral song with a bunch of nonsense syllables that has stood out. Think 'Class Historian' by BRONCHO, or 'Ya Ya Ya' by You Won't. But I went all of 2018 without one of these songs worming their way into my head. Which means I have more than a dozen great songs on my longlist with no clear way to distinguish them.

'Motion Sickness' by Phoebe Bridgers might have come out on top if it hadn't been released in 2017.

There were a bunch of other strong female voices on the list, perhaps none more plainspoken than Camp Cope's 'The Opener'. That song is so strong it kinda dwarfs the rest of the band's sophomore album (and stands head and shoulders above the rest of their live set). At the other extreme there's Lana Del Rey, whose 'Mariners Apartment Complex' is actually kind of autobiographical but it still feels like an act - but that's why I love her. It's like she's aping Shakira singing a ballad in order to speak honestly. And that line: 'I'm your man.' 👌

Valley Queen and Slothrust were louder but just as grandiose.

Tropical Fuck Storm's 'Lose the Baby' led the pack in terms of loud, bloke-fronted songs, but then is this cover better than the original? And TFS didn't see fit to put it on their album, so...

'My Body' by David Bazan from his split LP with Sean Lane, Rare Coins. 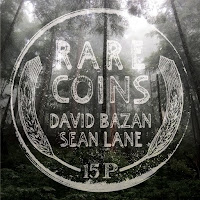 1) It's a great song. A slower tempo than your classic earworm but I definitely sung this in the shower multiple times this year.

2) Lyrically, it speaks to me. I mean, the chorus:

Straight to the pool room*
__
* Pool room = playlist for my novel, NAILING DOWN THE SAINT, which comes out in August and deals with parascientific phenomena like levitation and premonitions.

3) Upping Bazan here is a kind of two-for-one, as it saves me writing something separate about my favourite new-to-me (but definitely not new) artist.

I got into Bazan in a big way in 2018, first through Lo Tom (a supergroup including TW Walsh, whose album Terrible Freedom came in at #3 on my 2017 list; Lo Tom's self-titled also came out in 2017 and might have come in at #1 on that year's list if I'd heard it in time...), then Bazan's solo album Care, also from 2017, then all his solo stuff, then Headphones and finally back to Pedro the Lion. With the first Pedro the Lion album in fifteen years coming out later in 2019, my obsession isn't likely to abate any time soon.

I love Bazan's voice. He sounds depressed and beaten down but at the same time there's a strength to it. The vocals are always way up in the mix and his lyrics are so often coming from a pocket of power, or at least insight. The son of a pastor, there's a pulpit quality to many of his songs. Here is how I'm broken - I hope you can take something from my experience.

I was listening to a bunch of Bazan and Bazan-band albums over the weekend as I built some shelves in my garage and I realised how the guitar-based stuff sounds like The Lemonheads - less druggy, less flippant, more professional, but definitely in a similar sonic vein.

My kids love Gene McDaniel's 'Tower of Strength' from 1961 (written by Burt Bacharach) and I play it for them often because it's pretty great.

I also really like 'Sixteen Ways' by Green on Red from 1982.

But I've gotta go with my nonsense-syllable-loving ways and honour Tom Russell's Stealing Electricity'. It's from 2006 but it sounds like it could have been recorded any time in the last fifty years. There's a good dollop of Johnny Cash and a whiff of Warren Zevon.

Any song whose chorus goes:

is going to be a bit daft, but like Cash and Zevon, it's not all nonsense.

I remember as a teen (or pre-teen?) reading about indigenous youth in rural Australia being so depressed that they climbed powerlines to electrocute themselves - and then discovering Soundgarden, particularly their songs 'Fell on Black Days', 'The Day I tried to Live ("The day I tried to win / I dangled from the power lines / and let the martyrs stretch, yeah") and 'Jesus Christ Pose' and it was like Chris Cornell was haunted by the same stuff as I was.

So a tale about "A mexican dead up on a power line..." brings in all those associations for me, all within a honky tonk earworm package. May it find it's way into dozens of playlists over the years to come!